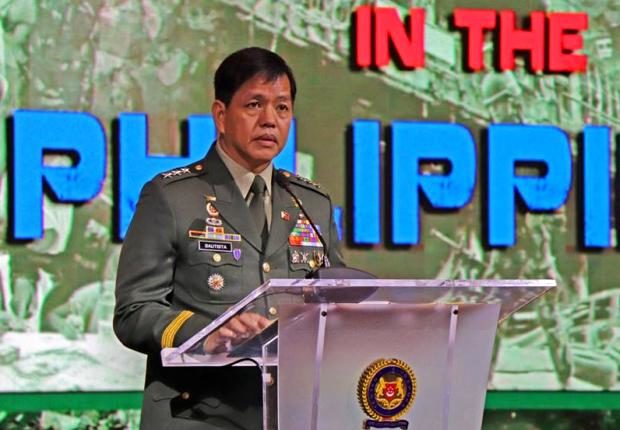 Lt. Gen. Joselito Delizo Bautista, commanding general of the Philippine Army, provided a first-hand account of the lessons learned by the Philippine Army in the Marawi conflict. He was among the speakers at the Asean Armies Information Sharing Workshop last Wednesday, July 4, 2018. (Photo from the Facebook page of the Singapore Ministry of Defence)

Goh stressed in his speech that cooperation between Asean armies is important to combat the threat of terrorism, and that the resilience, response and recovery framework could be used to strengthen collective efforts in combating terrorism and CBR threats in the region.

He was speaking at the opening ceremony of the Asean Armies Information Sharing Workshop on Wednesday, attended by over 100 delegates.

The workshop, which took place from Tuesday to yesterday, consisted of two plenary sessions and a roundtable discussion.

Dr. Jolene Jerard of the S. Rajaratnam School of International Studies and Dr. Loke Weng Keong of the DSO National Laboratories highlighted recent trends in terrorism and emerging CBR threats in the region at the second plenary session.

And during the roundtable discussion, Asean army intelligence chiefs shared how they are committed to regional peace, security and stability.

Said Singapore’s Col. Edward Chen, assistant chief of general staff (intelligence): “The discussions were rich and meaningful, paving the way for further cooperation in the region.”

The workshop is one of the key initiatives declared at the 18th Asean Chiefs of Army Multilateral Meeting last year. It serves as a platform for Asean armies to share information and engender practical cooperation in areas of common interests.