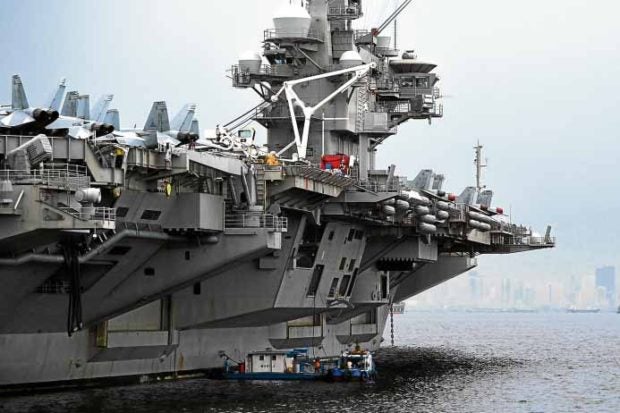 PH VISIT The USS Ronald Reagan drops anchor in Manila Bay on Tuesday, making the third call
by an American nuclear-powered aircraft carrier to the Philippines in four months. —AFP

ABOARD THE USS RONALD REAGAN — A US aircraft carrier visited the Philippines on Tuesday, the third such call in four months, as its commander cited America’s “enduring presence” in a region where China’s military aims have raised tensions.

The nuclear-powered USS Ronald Reagan docked in Manila after sailing through the disputed South China Sea as part of a mission intended to reassure Washington’s allies in the area.

China claims almost the entire sea, through which trillions of dollars in trade passes annually, with competing partial claims from Brunei, Malaysia, the Philippines, Taiwan and Vietnam.

Beijing drew criticism after it landed bombers last month on a disputed island in the disputed waters and reports emerged that it had installed missiles on another.

US dedication to Asia

The US carrier’s commander, Rear Adm. Marc Dalton, told reporters on board that the visit was meant to demonstrate America’s dedication to the region.

“Countries that are concerned about US commitment can look to the continued routine presence of [the] Ronald Reagan Strike Group as reassurance,” Dalton said.

“We have operated naval forces in the Pacific for seven decades… and that is an enduring presence and an enduring mission that has not changed and it will not,” he added.

This is the third visit since mid-February of an American aircraft carrier to the Philippines or nearby waters, and comes as Manila takes a nonconfrontational approach with Beijing over the South China Sea.

While the Philippines won a key 2016 ruling against China’s claims in the waterway, President Duterte has opted to set it aside in order to court Chinese investment and trade.

The Reagan, whose nearly 335-meter length exceeds the height of the Eiffel Tower, is on a four-day visit to the country.

The Nimitz-class “supercarrier” carries 5,500 sailors and more than 70 aircraft.

US Navy presence in the region is a flexing of American military muscle that Dalton said was intended to “promote adherence to a rules-based international order.”

The Pentagon has criticized “intimidation and coercion” in the disputed waterway, where the Chinese Air Force landed long-range bombers for the first time on Woody Island in the Paracel group, putting the entire Southeast Asia within their range.

The Duterte administration has faced pressure to get tougher with Beijing, especially after reports emerged this month that Chinese coast guards had taken Filipino fishermen’s catch at Panatag Shoal, a rich fishing ground off the Philippines’ Zambales province.

Manila has said it is working closely with China and is registering protests, but quietly so as to avoid confrontation.

The US Navy periodically conducts freedom of navigation operations in the South China Sea, where it sails close to artificial islands Beijing has built on disputed reefs and turned into military bases to show it rejects any territorial claims.

Part of the Reagan strike group was the guided-missile cruiser Antietam, which along with a destroyer conducted a freedom of navigation patrol last month that angered Beijing.

Dalton said on Tuesday that China’s actions did not deter the US Navy from sailing in international waters.

“The US Navy conducts those [patrols] routinely and we will continue to conduct those routinely,” he said.