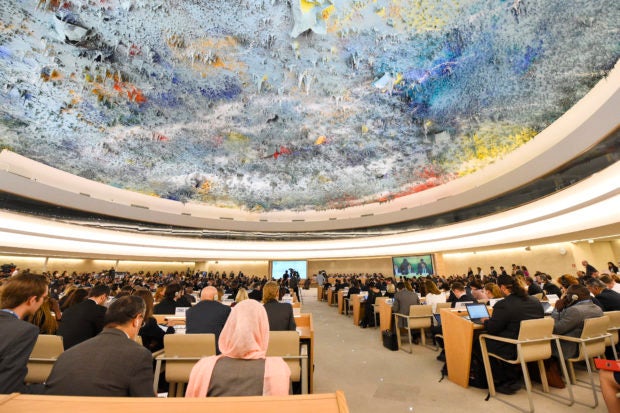 SESSION DAY The UN Human Rights Council on the first day of its 38th session on June 18. —AFP

The Philippines has again come under fire from the United Nations Human Rights Council (UNHRC) after 38 nations reiterated their call on the Duterte administration to end the killings in its war on drugs and to cooperate with international bodies in investigating rights abuses.

But Malacañang dismissed the petition on Saturday, saying the government was already making its own assessment of the country’s human rights situation and did not need foreigners to tell it what to do.

The 38 nations, including the United States (before it left the council), United Kingdom and Australia, also called on the Philippine government to stop harassing human rights defenders, journalists and the Commission on Human Rights.

“We urge the government of the Philippines to take all necessary measures to bring killings associated with the campaign against illegal drugs to an end and cooperate with the international community to investigate all related deaths and hold perpetrators accountable,” the UNHRC said in a statement issued on June 19.

Presidential spokesperson Harry Roque insisted that the government had an inventory of cases of alleged drug suspects who were killed in the war on drugs “to find out whether the right process was followed [by the police] or not.”

“This means we do not need foreigners to call on us because we are already doing it, even if there is no such call,” Roque said in a statement.

The Philippine National Police maintained that the government did not have any policy “to kill drug suspects” in their operations.

Police spokesperson Senior Supt. Benigno Durana denied that law enforcers abused their mandate as he urged the UNHRC to refer its complaints to the Office of the Solicitor General.

Policemen, he said, have the “right to defend themselves and use appropriate amount of force to effect arrests of usually armed and drug-crazed suspects.”

The UNHRC is holding its 38th session in Geneva, Switzerland, from June 18 to July 6.

The countries issued basically the same call against President Duterte’s brutal antinarcotics campaign during the UNHRC’s sessions in September 2017 and in March this year. Iceland drafted the latest statement.

The UNHRC, the influential rights body that counts the Philippines as one of its 47 member countries, meets thrice a year in Geneva.

“We are also concerned over reports of harassment of persons exercising their rights to freedom of opinion and expression, including human rights defenders and journalists … [and] members of the Commission on Human Rights,” its statement read.

Mr. Duterte had lashed out at the UN special rapporteur on extrajudicial killings, Agnes Callamard, several times and resisted her calls to investigate rights abuses and extrajudicial killings in the war on drugs. —REPORTS FROM DONA Z. PAZZIBUGAN, CHRISTINE O. AVENDAÑO AND JAYMEE T. GAMIL