The Philippine government suspended on Thursday all backchannel talks with the communist movement for a three-month review of all signed agreements on the peace talks.

“The government team also conveyed the Philippine government’s decision to suspend all backchannel talks with the NDF pending the three-month review of all signed agreements related to the peace negotiations,” Braganza said in a statement.

“The suspension, however, does not preclude communications between the two parties if deemed necessary,” he added.

Third-party facilitators from the Royal Norwegian Government led by Special Envoy for Peace Idun Tvedt were also present during the meeting. 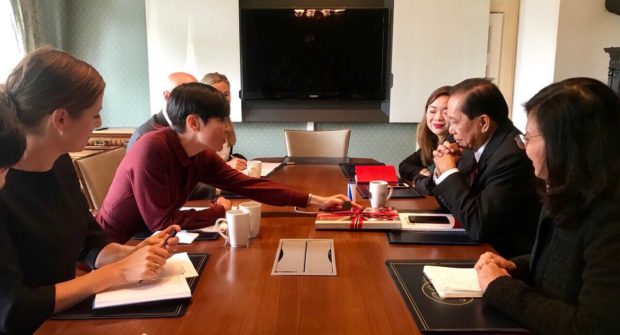 Presidential Adviser on the Peace Process Jesus Dureza meets with Norwegian Minister of Foreign Affairs Ine Marie Eriksen Søreide in Oslo, Norway to talk about the peace talks between the government and the communist rebels. Ambassador Idun Tvedt and other Norwegian officials are also present during the meeting. OPPAP Photo

Braganza said, “the NDF representatives expressed willingness to keep an open mind on the President’s decision and wait for the outcome of the government’s review before proceeding with any peace conversation with government.”

He said the NDF peace negotiators have “reiterated their commitment to all signed agreements,” including those involving the planned visit of Sison to the Philippines to meet President Rodrigo Duterte.

“In turn, we extended the government panel’s appreciation to the NDF’s open-mindedness in coming to terms with President Duterte’s decision,” he said.

Braganza relayed to the NDF the decision of Peace Secretary Jesus Dureza “to utilize” the three-month review period to consult other agencies of the government and the public.

Dureza had earlier said the scheduled resumption of peace talks later this June was canceled to allow the government to conduct public consultations.

“The NDF leaders, for their part, expressed intention to conduct their own separate actions and activities that aim to protect the gains already achieved as a result of backchannel, informal and formal talks between the two panels,” Braganza said.

He also said the NDF negotiators were “favorably considering” the invitation of Dureza and Labor Secretary Silvestre Bello III to join the public consultations on the peace negotiation.

“It is our fervent hope that the consultations will help galvanize public support to peace efforts aimed at ending the armed conflict through the achievement of economic, social and political reforms,” Braganza said.

During the meeting, the government thanked the Norwegian government “for their continuing support to our peace conversations not only with the NDF but with other rebel groups interested in the attainment of just and lasting peace in the Philippines.”

In a separate statement, the Office of the Presidential Adviser on the Peace Process (OPAPP) said Norway remained committed to facilitating the talks between the government and the communist rebels.

“We are, as you know, as strongly committed as we have ever been to trying to facilitate these talks as much as we can,” Norwegian Minister of Foreign Affairs Ine Marie Eriksen Søreide was quoted as saying to Dureza.

“I think it’s very important to convey the message to you that we have the necessary patience in this and we are not going anywhere. We want to see this through. We want to see the results and if there is anything we can do to facilitate,” she added.  /kga