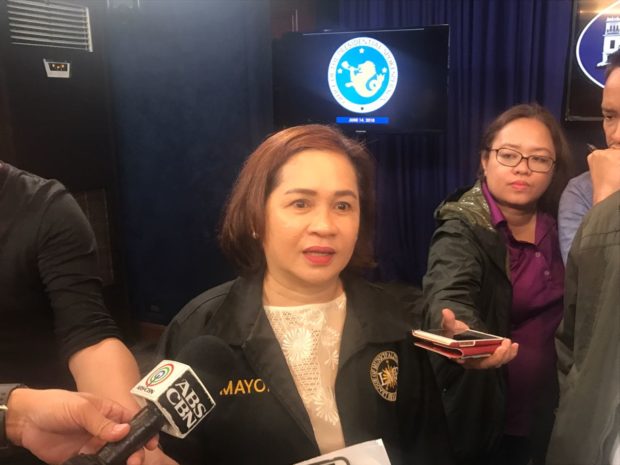 The mayor of Masinloc town in Zambales on Thursday appealed to President Rodrigo Duterte to ensure that Filipino fishermen would be allowed to continue fishing “unhurt” at Scarborough Shoal, following reports of Chinese harassment.

Mayor Arsenia Lim confirmed that members of the Chinese Coast Guard have been taking the catch of Filipino fishermen at the resource-rich shoal.

(That’s all we ask the President: for the fishermen to fish without being bullied and the right to take refuge in the lagoon when the winds are too strong.)

Internationally known as Scarborough Shoal, Panatag is a rich fishing ground off the coast of Zambales in the West Philippine Sea.

Lim said Scarborough has been a traditional fishing ground for Filipinos and local fishermen should not ask China’s permission to fish in the area.

(We shouldn’t have to ask permission from China but for now Masinloc LGU’s position is that our fishermen should have the right to make a living and to fish properly.)

Lim described this incident like having a “toll fee” in the sea.

“Yun nga, parang may passway, may toll fee sa gitna ng karagatan (It’s as if there’s a passway, a toll fee in the middle of the ocean),” she said.

The issue, she said, was now in the hands of the President.

(The discussion is now in his hands because of course, he is the right person who should fix this because he is the President. And as the father of the Philippines, he doesn’t want our countrymen to be harmed, especially the humble fishermen.) /je