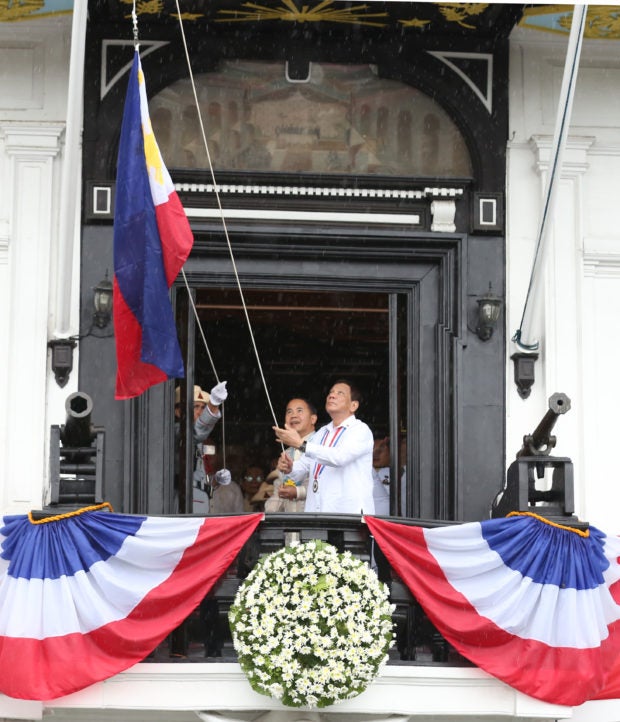 The President and Zhao had a brief talk at Aguinaldo Shrine here, from where Gen. Emilio Aguinaldo, leader of the revolt against Spanish colonial rule, proclaimed Philippine independence on June 12, 1898.

Zhao’s presence at the celebration of the 120th anniversary of Philippine independence raised eyebrows and drew disapproving comments on social media, although he was just one of the foreign diplomats invited to the event.

The meeting came amid controversy following reports that Chinese coast guards are confiscating the catch of Filipino fishermen at Panatag Shoal, a rich fishing ground located 230 kilometers from the coast of Zambales province, well within the Philippines’ 370 exclusive economic zone (EEZ) in the South China Sea but controlled by China.

“President Duterte shared his concern about the Filipino fishermen,” Zhao told reporters after the event.

Zhao said Beijing was conducting a “serious and responsible” investigation of the Filipino fishermen’s complaints.

He said Beijing would “discipline” coast guards who would be proven to have taken fish from Filipinos at Panatag.

Zhao referred to Panatag by its Chinese name—Huangyan.

Panatag is internationally known as Scarborough Shoal. Although it is in the West Philippine Sea — waters within the Philippines’ EEZ in the South China Sea — it does not generate territorial waters and therefore does not belong to any party in the territorial disputes in the strategic waterway, according to the July 2016 ruling by the Permanent Court of Arbitration in The Hague.

Scarborough Shoal, the court ruled, is a common fishing ground for the Philippines, China and Vietnam.

He said the Philippines and China had a “friendly agreement” that allowed Filipinos to fish at Panatag Shoal.

“This arrangement has not changed and will not be changed,” Zhao said.

He said initial investigation by both sides showed Chinese coast guards were not harassing Filipino fishermen and not confiscating their catch.

“It is some sort of barter trade, which has been going on for quite some time,” Zhao said, adding Chinese coast guards exchanged food and water for the Filipinos’ fish.

Rommel Cejuela, one of three fishermen quoted in last week’s television report about Chinese abuses at Panatag, said on Monday that the coast guards were not harassing Filipino fishermen but they were persistent about getting fish and always picking the best ones that cost up to P4,000 each.

Cejuela and his companions asked the government to help ask China to stop its coast guards from having their way with Filipino fishermen.

Presidential spokesperson Harry Roque told reporters that the Philippines had brought up the matter with China and demanded Beijing to stop the “unacceptable” practice.

Asked on Tuesday about Cejuela’s statement that China still controlled Panatag Shoal, Zhao said he would take note of the complaint, and insisted an investigation was going on.

On reports that China does not allow big fishing vessels at Panatag, Zhao said the two countries had an understanding on the matter.

“Both sides will only allow fishermen to go there. Up until now, we do not encourage commercial fishing of the large fishing vessels there because we also have a responsibility for protecting the species of the fish and also the environment there,” he said.

Asked what he had discussed with President Duterte, Zhao replied that it was confidential.

Opposition Sen. Francis Pangilinan said he was not surprised that Zhao was at the Kawit event.

“It isn’t surprising, considering how the current administration has put in place a policy of appeasement as a response to China’s illegal annexation of thousands of square kilometers of our exclusive economic zone,” Pangilinan said.

Social media were abuzz with pictures of Zhao talking with Mr. Duterte and Defense Secretary Delfin Lorenzana, with the caption for one photo noting the “irony” of celebrating freedom in Chinese shackles.

“Governor of the Philippines speaking with representatives of President Xi,” a commenter said on Twitter.

“We should be proud of our president. He’s the 1st president to make our country the 1st official colony of Imperial China in the 21st century,” another tweeted.