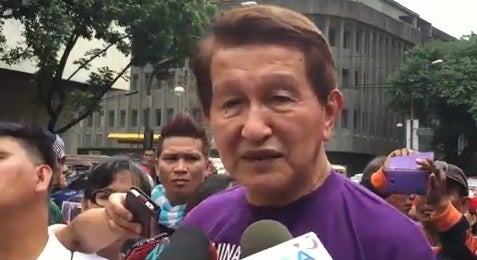 He was interviewed by radio network DZRH early Monday morning, which was also carried live on his Facebook page.

Golez, a former Philippine Navy officer, discussed the recent presence of a Chinese military plane in Davao City amid concerns over Beijing’s creeping invasion of the Philippine-claimed territories in the South China Sea.

An aircraft of the People’s Liberation Army landed in Davao City to refuel last week, the government said, after photos of the IL-76 plane circulated online.

ABS-CBN said Golez was also supposed to give an interview to discuss the sea row with China over ANC early Monday but it did not push through because “he felt unwell.”

The former congressman was active and passionate on discussing the sea dispute in various public forums and on social media.

Golez served as national security adviser from 2001 to 2004 during the time of former president Gloria Macapagal Arroyo. He also served as congressman in Paranaque for six terms.   /kga