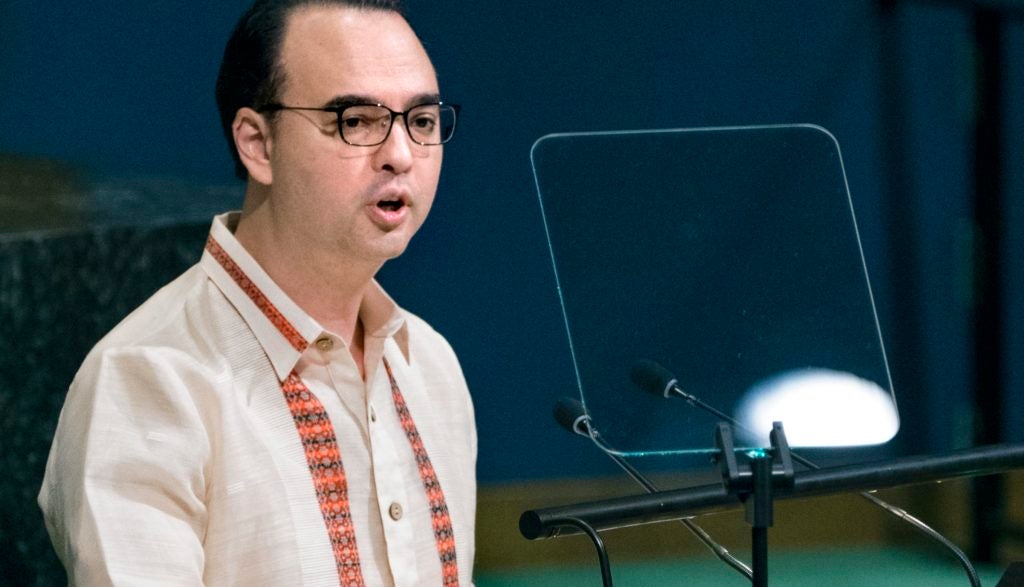 The Duterte administration is “taking all diplomatic action” in dealing with the reported harassment of Filipino fishermen by Chinese Coast Guard personnel at Panatag Shoal, according to Foreign Secretary Alan Peter Cayetano.

Cayetano on Sunday thanked GMA Network for its report, with a video showing Filipino fishermen, who had spent days fishing at Panatag, watching helplessly as two Chinese coast guards make off with their prime catch.

“[It’s] important for us that our fishermen are able to report complaints like this so that we can act on it right away,” he told reporters in an interview at Ninoy Aquino International Airport, where he welcomed distressed Filipino workers returning from the United Arab Emirates.

“We are assuring you that we are taking all diplomatic action. Look at the results, not just the steps taken,” he said.

“Why do you do protest? Why do you do diplomatic action? Because you want results. This administration is focusing on the results,” he added.

Cayetano, however, did not specify the diplomatic action the government was taking following the report of the harassment, which the fishermen said had been happening for some time.

Sen. Gregorio Honasan II on Sunday urged the government to verify the report and protest the harassment.

He said President Rodrigo Duterte and Chinese Ambassador to the Philippines Zhao Jinhua could take up the matter with Chinese President Xi Jinping.

But Senate President Vicente Sotto III said the acts of Chinese coast guards were not those of the Chinese president.

A diplomatic protest may not be called for, Sotto said.

“We can have a dialogue. Like, if pirates were the ones who attacked, where would we take [our complaint]? It’s not that easy to protest every little thing,” he said.

Sotto also said it was foolhardy to quarrel with China, considering it “controls” the national power grid, referring to the 40-percent stake of State Grid Corp. of China in the National Grid Corp. of the Philippines.

But Sen. Richard Gordon said the government should lodge a protest with China, as the Chinese coast guards were “preying on the helpless fishermen who are merely trying to make a living.”

Cayetano said he and Foreign Undersecretary Ernesto Abella had already spoken separately with Zhao regarding the matter, which acting Chief Justice Antonio Carpio said should prompt the Philippines to lodge another case against China in the Permanent Court of Arbitration in The Hague.

But Cayetano seemed to be content with the assurance given by Zhao.

“We were assured by the Chinese ambassador that they will apply the law very harshly against the violators,” he said, without explaining which law had been violated.

“We already had an agreement with them that the fishermen should be able to freely fish there. The only exception [is] the protected areas,” he added.

Cayetano said the lagoon at Panatag—internationally known as Scarborough Shoal—was the spawning ground for various species of fish and giant clams.

“If there are Filipino, Chinese or Vietnamese fishermen there, they will be apprehended,” he said.

According to Cayetano, both Beijing and Manila were considering setting up a “complaint system” to handle reports of harassment committed by the Chinese Coast Guard against Filipino fishermen.

While the Filipino fishermen interviewed by GMA News reporter Jun Veneracion accused the Chinese Coast Guard of seizing their catch, Cayetano said some local fishermen were actually known to sell their catch or exchange their fish for other goods with the Chinese.

The foreign secretary also blasted Magdalo Rep. Gary Alejano for claiming that President Duterte had directed the military to stop patrolling the West Philippine Sea “because nothing will happen anyway.”

Alejano said on Saturday that he received the information from sources in the military and that Mr. Duterte gave the order last year.

The military protested, saying it would be remiss in its duty to protect Philippine sovereignty if it stopped patrolling Philippine waters, Alejano said.

A compromise was struck, however, allowing for one patrol a month, but this has been hardly carried out, he added.

“This is a blatant lie,” Cayetano said on Sunday. “I don’t know if he fell for a bum steer or if he was just misleading us so he will be in the news after he announced his plan to run as senator,” Cayetano said.

He said military officials had denied the supposed order from Mr. Duterte. —WITH REPORTS FROM DJ YAP AND ANTHONY Q. ESGUERRA