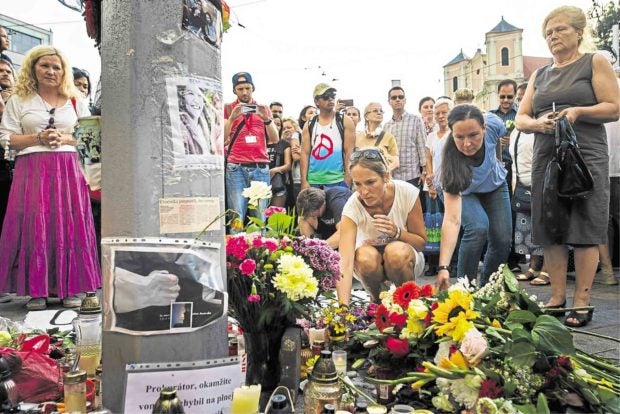 MOURNING FOR A HERO Thousands of Slovaks rally in Bratislava, Slovakia, on June 8 to pay tribute to murdered Filipino expatriate Henry Acorda, who was beaten to death by a neo-Nazi.—AFP

BRATISLAVA — Thousands of Slovaks rallied in the capital Bratislava on Friday to pay tribute to a murdered Filipino expatriate, beaten to death by a man believed to be a neo-Nazi.

Henry Acorda, a 36-year-old Filipino living in Slovakia, was assaulted in the heart of the capital on May 26 by 28-year-old Juraj H., whose surname has been withheld pending trial.

Reports in Manila, however, identified him as Hiraj Hossu, 28. He is now detained and charged with manslaughter.

Five days later Acorda died in hospital from injuries from the attack.

Organizers said around 3,000 protesters, mostly in their twenties, turned out for the memorial rally that began with a violinist playing a mournful tune.

Some carried banners reading “Justice for Henry” and “Nazi brain burn in hell.” Others laid flowers and lit candles at an improvised memorial where the attack occurred.

Security footage made available to the media showed that Juraj H. hit Acorda, who then fell and became unconscious.

The attacker continued to kick Acorda in the head and used a mobile phone to photograph him lying in the street.

Prosecutors have placed Juraj H. in pretrial detention. If found guilty, he could face up to 12 years behind bars.

Police have neither confirmed nor denied that the attack was racially motivated.

Juraj H. said he “will be sorry for what happened for the rest of my life. But I don’t remember anything,” while being escorted from court on Monday.

The Friday rally was organized on Facebook by four antifascist groups.

“The information that we have about Juraj H. makes it clear that he is inclined to support the far right,” they wrote.