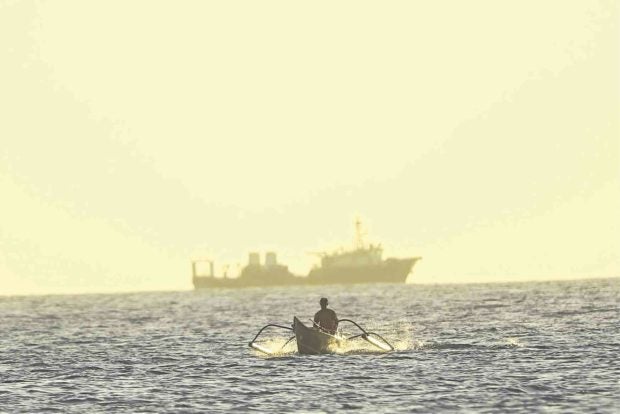 RISKY WATERS A Filipino fisherman in a banca moves away from a Chinese Coast Guard vessel at Panatag (Scarborough) Shoal in the West Philippine Sea. —REM ZAMORA

A video report that showed Filipino fishermen watching helplessly as Chinese Coast Guard personnel seized part of their catch at Panatag (Scarborough) Shoal should move the government to file a protest with Beijing or even another case with the international arbitral tribunal, acting Chief Justice Antonio Carpio said on Friday.

Carpio was part of Manila’s contingent that argued and won the Philippine case in the Permanent Court of Arbitration against China’s claim to virtually the entire South China Sea, including parts of the Philippines’ 320-kilometer exclusive economic zone (EEZ).

“Are we slaves of China?” Atiga asked.

“It seems that our government has not acted on [these forms of aggression],” Atiga said.

Presidential spokesperson Harry Roque said that if it were proven that the Chinese were getting fish, routinely as claimed by the fishermen, the government would file a protest. But the report, which aired on GMA News on Thursday, did not show the Filipinos being bullied, he said.

“If established, it’s a ground for protest. I have asked GMA 7 to authenticate it, but the video that I saw was inconclusive. I didn’t actually see any bullying,” Roque said.

“Anyway,” he added, “I asked the fishermen for their written statement.”

Speaking to reporters after the Supreme Court’s 117th anniversary celebration, Carpio said the Chinese Coast Guard had no right to take fish caught by Filipinos.

“That’s not supposed to be done. So we should protest,” he said. “If you want to be forceful about it, we can bring another case against China for not abiding with the [July 2016] ruling.”

The July 2016 ruling by the international arbitration tribunal recognized the Philippines’ sovereign rights over the West Philippine Sea and voided China’s claim over most of the South China Sea.

“The arbitral ruling stated that we have the right to fish in the territorial sea of [Panatag] Shoal, but Chinese Coast Guard vessels have been preventing our fishermen,” he said.

Carpio, the most authoritative voice in the country’s territorial dispute with China, insisted that the Philippine government should formally protest against the harassment of Filipino fishermen at Panatag Shoal, also known as Bajo de Masinloc.

“That’s the course of action we must take to protect the interest of our fishermen,” he asserted.

The shoal west of Zambales has been a traditional Filipino fishing ground within the Philippines’ EEZ that China seized after a two-month standoff with the Philippine Navy in 2012.

The incident sparked a diplomatic row between Manila and Beijing, and prompted the Aquino administration to seek the arbitral tribunal’s intervention.

Filipinos who often fish at the shoal say they feel helpless because the government has not acted on reports that the Chinese are harassing them.

Ronnie Lebios, 42, a fisherman from Infanta town in Pangasinan province, confirmed accounts by other fishermen.

He told the Inquirer the Chinese would open the boxes where they kept their catch and choose the big fish, at least 15 kilograms worth, including “first-class” “maya-maya” (red snapper) and grouper.

This started happening a few months after the Chinese Coast Guard stopped blocking Filipinos approaching the shoal to fish in October 2016, Lebios said.

His last encounter with the Chinese was on May 4. “We tried to stop them but they would not listen,” he said.

Many of about 2,000 fishermen from Subic, Zambales, who fish at the shoal have made similar reports, according to Laureano Artagame, head of the municipal fishing vessel registry unit.

“We have not failed to report these incidents to the Bureau of Fisheries and Aquatic Resources,” Artagame said.

“I don’t understand why this kind of harassment persists. We’re helpless and our government seems to be ignoring it,” he said.

Magdalo Rep. Gary Alejano said the reports validated his statement at a recent House hearing that Filipino fishermen were “at the mercy of the Chinese forces” at Panatag Shoal and “acting much like pirates bypassing small Filipino fishermen and stealing their catch.”

“This is just another proof that what the Duterte administration is saying contradicts what is the reality below. They are just fooling the people,” Alejano said in a statement.

“China does not seem to treat us as a sovereign equal anymore,” Alejano said.

In a statement, Del Rosario said the President’s recent admission that he was unaware that Filipino troops guarding Ayungin Shoal had been harassed by Chinese forces showed he needed “a fuller briefing from his people.”

“Of utmost primacy is the protection of the hard-earned gains of the Filipino people as handed down by the … arbitral tribunal,” said Del Rosario, who often criticized the administration’s silence on controversial moves by Beijing, including the deployment of Chinese missiles on artificial islands built on Philippine-claimed reefs.

“Our President may want to consider having his people closely coordinate with the acting Chief Justice on matters related to the South China Sea,” he said.

He said the Philippines could work on a proposed UN resolution urging China and the rest of the world to respect the decision of the arbitral tribunal.

He also lamented the President’s apparent lack of interest in Sandy Cay, a sandbar located about 4.5 km off Philippine-controlled Pag-asa Island in the Spratlys.

In August last year, Carpio warned that Chinese vessels, including a Coast Guard ship and two fishing boats, were guarding Sandy Cay in what he called was an “invasion of Philippine territory.”

Mr. Duterte, however, dismissed his statement and said Beijing “has put it on record” that it would “not build anything” on both Sandy Cay and Panatag Shoal.

Mr. Duterte said he saw no reason for the Philippines to go to war with China over a sandbar.

Del Rosario said the President’s reaction to the Sandy Cay incident “was obviously a decision made without the benefit of being provided full information.”

Quoting Carpio, Del Rosario said China could claim Zamora (Subi) Reef as part of the territorial sea of Sandy Cay if it acquired sovereignty over the sandbar, and then “significantly reduce the territorial sea of Pag-asa Island.” —WITH REPORTS FROM JULIE M. AURELIO, JEROME ANING, ALLAN MACATUNO AND GABRIEL CARDINOZA