Duterte unaware of Chinese harassment of PH troops on shoal 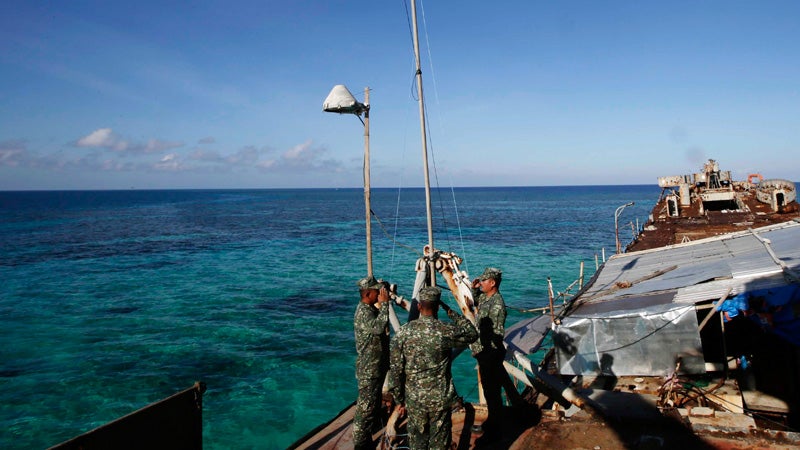 President Rodrigo Duterte said he was unaware of the harassment of Filipino troops by Chinese forces at Ayungin Shoal in the Spratly archipelago last month, which Foreign Secretary Alan Peter Cayetano said the Philippines had protested.

In a talk with reporters at Ninoy Aquino International Airport on Tuesday night after returning from an official visit to South Korea, the President was asked if it was true that he was angry with China because of the incident.

“I don’t know about that incident. I was busy talking to Korean officials,” the President said, asking what happened at Ayungin Shoal.

Presidential spokesperson Harry Roque helped to explain the incident to the President.

“This is the first time I’ve heard of it,” the President said.

Magdalo Rep. Gary Alejano reported the incident during a May 30 congressional briefing on recent developments in the South China Sea territorial disputes.

Alejano, a former Marine officer, said the incident happened on May 11.

He said Philippine Navy personnel were delivering supplies to the Marine garrison on BRP Sierra Madre from a rubber boat when they were challenged by Chinese coast guards.

Cayetano confirmed the incident and said the Department of Foreign Affairs had filed a “diplomatic note” with China.

Cayetano, however, said Alejano had “weakened” the Philippines’ position by reporting the incident.

If he had his way, Cayetano told reporters before flying to Seoul on Friday to join President Duterte’s official visit to South Korea, the incident would not have been disclosed to the public.

“Congressman Alejano immediately announced that there was an incident on May 11. But that’s why [both sides] are talking. If it can’t be resolved, then we will speak up so there will be pressure on the other side and we will bring this up [in other venues],” Cayetano said.

Sought for comment on Wednesday, Alejano said Cayetano should be angry with the Chinese, not with him.

Alejano said the Filipino people had a right to know what’s happening to their soldiers stationed in the Spratlys.

“Instead of holding the aggressor for its actions, Secretary Cayetano seems more infuriated that the Filipino people were informed of the harassment against our soldiers on Ayungin Shoal,” Alejano said in a statement.

“If this information was not released, would the Duterte administration [have informed] the public of such grave concern?” he asked.