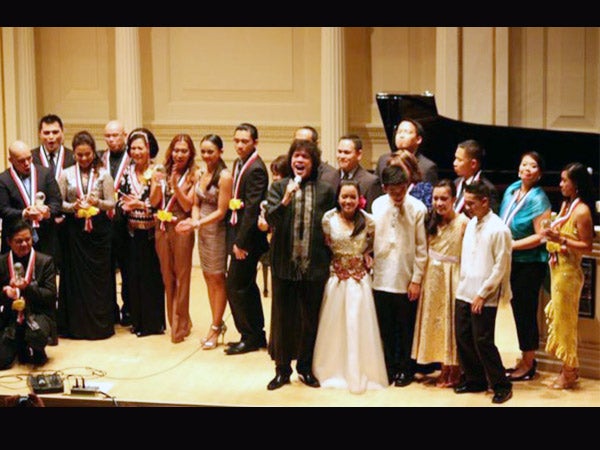 On a night when it snowed in October for only the third time in 142 years in Manhattan, Carnegie Hall glittered as hundreds huddled to honor and fete 2011’s best Filipino Americans in New York.

“The Empire State is privileged to host this grand event, which brings together Filipino Americans who are the best in their field,” Gov. Andrew Cuomo said in a statement issued on the eve of The Outstanding Filipino Americans in New York awards ceremony held Oct. 29 at the Weill Recital Hall. “These exceptional individuals inspire future leaders and have earned well-deserved respect and admiration.”

U.S. Marshals spokesman Roland Ubaldo and Pulitzer Award-winning journalist Jose Antonio Vargas led the winners of this year’s TOFA-NY. Ubaldo, spokesman of the U.S. Marshals Service of the Southern District of New York charged with the disposition of the assets of Bernie Madoff, garnered the highest votes in Public Service. Vargas, whose controversial coming-out as an undocumented immigrant was both cheered and criticized, won the Courage of Conviction award.

The rest of the winners are:

Consul General Mario Lopez de Leon Jr. noted how the use of Facebook to pick out the winners made the TOFA-NY awards “unique.”

“Through the innovative use of social networking platforms, the public and the people whose lives were touched, inspired and affected by our honorees had the final say on who would make the list of the Outstanding Filipinos in New York for 2011,” he said in his keynote speech. “From a shortlist of individuals renowned for their skill, competence, professionalism, talent and courage, the public, particularly our own community members in the U.S., had a major say in the determination of the final awardees this evening.”

Philanthropist and business leader Loida Nicolas Lewis said Filipinos have been in the United States since the 17th century. To this day, they continue to be productive members of American society – from the caregiver who provides tender loving care to her patients to the resourceful entrepreneurs who could keep their companies going because “we know how to tighten our belt during the hard times.”

“We are patient, kind, fun-loving, forgiving, helpful and sensitive to the needs of others and are able to relate to whoever are our neighbors, whether they are white, black, brown or golden,” she said in her inspirational message.

Roland Ubaldo, whose 89-year-old grandmother came to the ceremony all the way from Chicago, said he was grateful for the recognition in the area of Public Service.

“I have served in the United States Marine Corps and I serve today as a Deputy United States Marshal. I have arrested the worst of the worst criminals and have taken them off of our streets and out of our communities,” he said. “I love my country, I love my heritage, and I am a proud Filipino American.”

Also expressing thanks was Venessa Manzano, who won in the Youth category for setting up The Filipino School of New York & New Jersey, a language and culture school for children.

She said, “Our heritage is our legacy. It is important that we continue to teach our children our heritage and to take pride in being Filipino, even if they are born and raised here. Without this knowledge, understanding and appreciation, a part of their identity may be missing or lost forever.

Jose Antonio Vargas thanked the Filipino community for their support, and made special mention of Loida Nicolas Lewis “who, within minutes of telling her about my decision to “come out” about being undocumented — about being TNT — instantly connected me to the kind folks at the Filipino American Legal Defense Fund.”

“Thank you to all Filipinos, here in New York, in America and around the world, for your support. Far more than you realize, you’ve given me courage,” he said.

“Transgender women still face a big hurdle in equality and human rights protection,” she said. “I have been in transition for many years now and contrary to Glaad’s slogan that one day it will get easy—for me it never gets easy.”

Consul General de Leon noted that while expatriate Filipinos cannot all physically go back home to their families and their childhood, “The honorees prove that home will always remain part of their spirit as they continue to further uplift the image of the Philippines and Filipinos worldwide.”