Duterte back in PH after South Korea visit 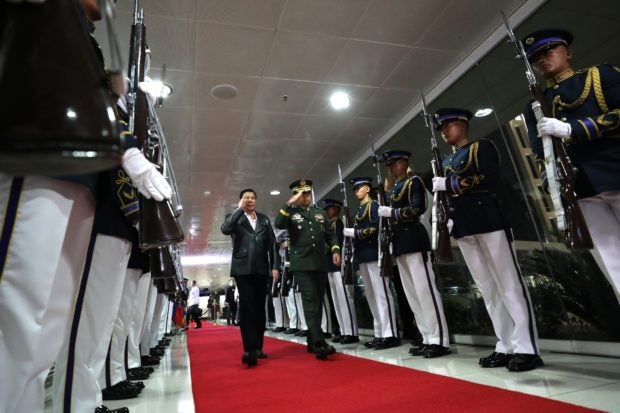 President Rodrigo Roa Duterte is accompanied by Armed Forces of the Philippines Chief of Staff General Carlito Galvez Jr. as he is accorded with foyer honors upon his arrival at the Ninoy Aquino International Airport on June 5, 2018 following a successful three-day official visit to the Republic of Korea. SIMEON CELI JR./PRESIDENTIAL PHOTO

President Rodrigo Duterte arrived in Manla shortly before midnight on Tuesday from his three-day official trip to South Korea.

During his visit to Seoul, the President met with South Korean President Moon Jae-in where the two leaders agreed to strengthen the diplomatic relations between Manila and Seoul as well as increasing trade and investment with each other’s countries.

The chief executive also met with businessmen in Seoul where he witnessed the signing of 23 business agreements signed between the two countries.

He also met with the members of the Filipino community there.

The President’s trip to South Korea was his fourth overseas trip this 2018.

READ: Duterte returns home with P4.858-B worth of investments