Duterte returns home with $4.858-B worth of investments from South Korea | Global News
Close
menu
search

Duterte returns home with $4.858-B worth of investments from South Korea 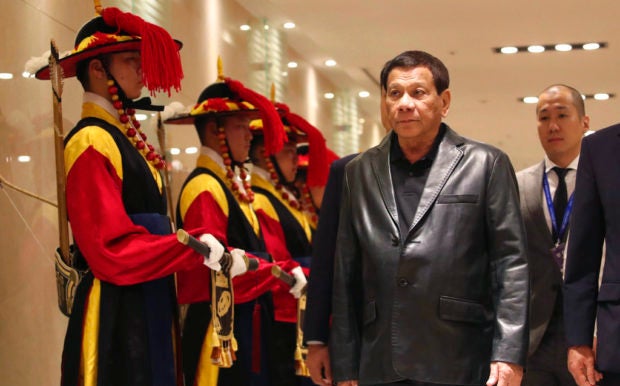 Just as he had arrived here last Sunday, the President took a commercial Philippine Airlines flight back to Manila where he is scheduled to arrive at 11:40 p.m. Manila time.

Mr. Duterte will be bringing home with him $4.858 billion in new investments from South Korea that his officials said will generate 50,800 new jobs to the country.

The investments came from 23 business agreements signed between the two countries that were witnessed by the President before he left for home.

The Chief Executive’s last day here was a busy one as it included a luncheon meeting with Filipino and Korean businessmen and a visit to the E-mart headquarters where he was the guest of honor at the Philippine food festival there.

His officials earlier said President Duterte was scheduled to look at defense equipment that included helicopters from the South Korean government.

The presidential visit here saw Mr. Duterte meeting with South Korean President Moon Jae-in where both agreed to increase trade and investments with each other’s countries as well as protect Filipinos and Koreans living, working, and visiting their respective nations.

The President was invited to visit South Korea by Moon last year. /je