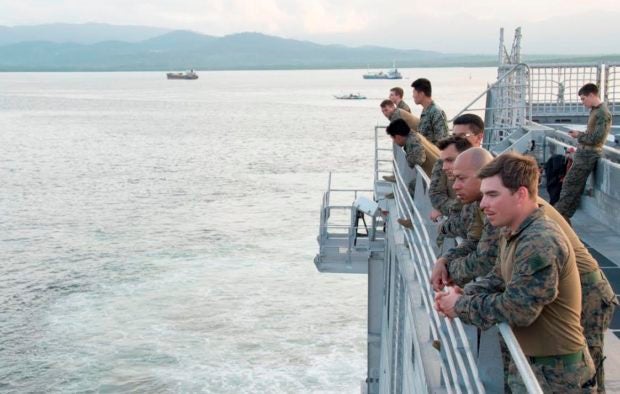 USNS Millinocket docks in Palawan on Monday, as part of its theater security cooperation patrol/ US 7th Fleet

A US Navy ship docked in Palawan for a visit as part of its theater security cooperation patrol.

The USNS Millinocket, one of the Navy’s high-speed vessels, arrived in Puerto Princesa on Monday.

Rear Adm. Joey Dodgen, U.S. 7th Fleet deputy commander is also scheduled to meet with several government and military officials aside from hosting a Big Top reception on board the ship for local dignitaries.

“Our discussions with the Republic of the Philippines continue to focus on strengthening our alliance through increased interoperability and capabilities. I hope my brief interactions with a variety of community and military leaders here in Puerto Princesa will be the beginnings of fruitful relationships,” Dodgen was quoted in saying in the statement.

The ship visited Malaysia and Singapore for flag-level staff talks, community relations projects and other engagements prior its stop to the Philippines.

The ship visit came shortly after US Defense Secretary James Mattis said in his speech at the Shangri-La Dialogue last Saturday that the US will not abandon the Indo-Pacific region.

Puerto Princesa is facing West Philippine Sea (South China Sea), one of the world’s busiest sea lanes, where the Philippines have claims, along with China, Malaysia, Vietnam and Taiwan.

China has recently deployed high-end weapons in its artificial islands, which Mattis accused them of “intimidation and coercion.”   /muf