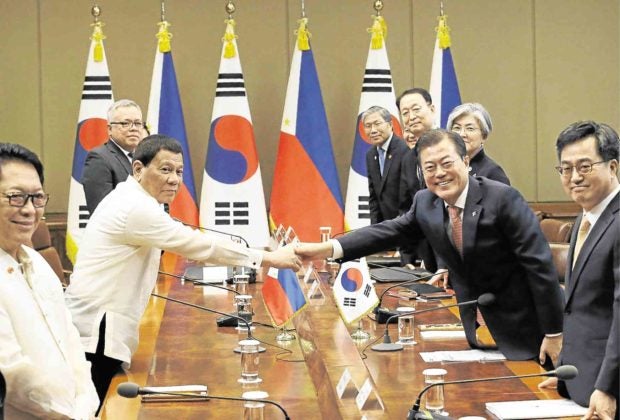 BILATERAL TALKS President Duterte and South Korean President Moon Jae-in meet for talks on renewing ties between the two countries at the Blue House in Seoul on Monday. Both countries are marking 70 years of relations next year. —AFP

Presidential spokesperson Harry Roque said on Monday night that the assistance was among the things discussed during the President’s meeting with South Korean President Moon Jae-in.

South Korea is also interested in helping in the rehabilitation of war-torn Marawi City, Hernandez said.

The President was in Seoul on an official visit on Moon’s invitation, extended last year.

The Philippines and South Korea agreed on Monday to strengthen their ties by increasing trade and investments, as well as provide protection to the growing number of Filipinos and Koreans living, working or visiting the two countries.

The two leaders held talks at the Blue House about renewing ties ahead of the 70th anniversary of relations between the two countries next year.

The agreements reached by the two leaders, which they announced through a joint statement issued after their meeting, ran in line with their policies to focus their sights on Asia.

The President said during the start of his bilateral talks with Moon that he welcomed South Korea’s new “southern policy,” or the South Korean leader’s bid to link his country to the Association of Southeast Asian Nations (Asean), of which the Philippines is a member.

Moon said the Philippines was the first Asean country to forge diplomatic ties with his country, adding that Manila and Seoul were “special friends” as he recalled that 7,500 Filipinos fought in the 1950-53 Korean War.

“[We] agreed to significantly increase our trade volume that currently stands at $15 billion and to further expand investment between our two countries,” Moon said.

“I hope to see more Filipinos visit Korea as well,” Moon said, adding that there are 93,000 Koreans in the Philippines and 60,000 Filipinos in South Korea.

He said he and Mr. Duterte also agreed to “make extensive efforts to protect the safety, rights and interests of our nationals, including through cooperation between our public safety authorities.”

Moon also thanked the Philippine President for promising to “pay closer attention and provide support toward the protection of the lives and safety of Korean nationals in the Philippines.”

He promised to safeguard Filipino migrants and their families in South Korea, and “protect their human rights.”

Moon also thanked the Philippine President for his support in achieving peace on the Korean Peninsula and in the region.

The Prtesident said his discussions with Moon covered political and economic cooperation as well as defense and technology, trade and investment, agriculture and protection of Filipino nationals in Korea.

“President Moon and I likewise emphasized the need for security and stability in the region, after all these are the foundations for solid growth,” he said.

He said he and Moon discussed the need to deal with “traditional and emerging threats” and collaboration in countering terrorism, transnational crimes and crimes at sea.

Mr. Duterte commended Moon for the South Korean leader’s bid to achieve peace, stability and prosperity on the Korean Peninsula.

“His selfless dedication is demonstrated by the historic summit last month which resulted in the declaration of peace, prosperity and reunification of the Korean Peninsula,” he said, referring to Moon’s meeting with North Korean leader Kim Jong-un.

After their bilateral meeting, the two leaders witnessed the signing of agreements between their countries, which included the following: