China’s weapons in Spratlys ‘a symbol of sovereignty’ – PLA general 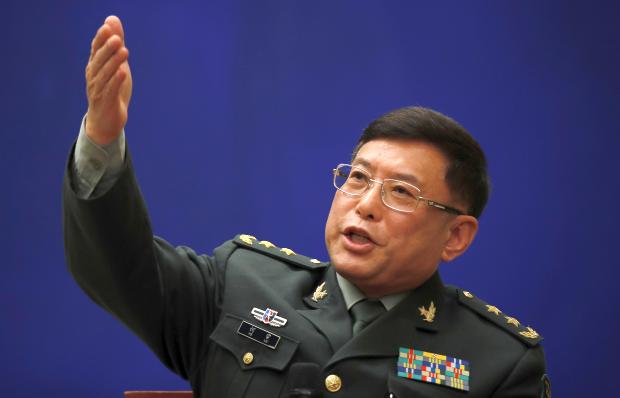 In this photo, taken March 8, 2018, Lt. Gen. He Lei, vice president of China’s Academy of Military Sciences, gestures as he speaks during a press conference on the sidelines of the National People’s Congress at the State Council Information Office in Beijing. China has dispatched a low-level military delegation to an annual security conference in Singapore that has dwelled heavily on Chinese activities in the South China Sea. (Photo by ANDY WONG / AP)

SINGAPORE — A Chinese general snapped at criticisms over China’s militarization and its deployment of weapons in the South China Sea, as it asserted its rights over almost the entirety of the disputed waterway.

“These weapons are a symbol of Chinese sovereignty. Think about it. No matter what country, you can deploy military assets of your own territory. It’s a matter of sovereignty,” said Lt. Gen. He Lei, head of the Chinese delegation to the Shangri-La Dialogue, one of the world’s biggest security forums.

“South China Sea are part of Chinese territory. Historical records prove that it is recognized by international law. It’s undisputed,” he said Saturday in one of the simultaneous sessions, hours after US Defense Secretary James Mattis accused China of intimidation and coercion in the contested waters.

He said that “irresponsible comments” criticizing their activities were “unacceptable.”

China has deployed high-end weapons – including anti-ship and surface-to-air missiles and communication jammers – in some of its artificial islands in the South China Sea in recent weeks.

One of the islands, Panganiban Reef (Mischief Reef) is within the Philippines’ exclusive economic zone.

The general’s comments marked the first time that China publicly acknowledged in an international gathering its activities in the disputed waters and its plans to continue to do so.

In 2015, President Xi Jinping told US President Barack Obama that China would not militarize the artificial features in the South China Sea.

But satellite and aerial photos show that China has built up runways, hangars and other facilities with military capabilities.

The Chinese general said in the same session that the weapons they deployed and would deploy in the future were intended for defense purposes and not targeted at any country.

“All weapons and soldiers are for avoiding being invaded,” He said.

He also defended the use of the facilities, saying he personally witnessed the construction in the South China Sea.

“They are for improving the living conditions of soldiers, civilian purposes and providing emergency services to vessels passing by,” He said.

“I suggest you go there and see it yourself,” he said.

The general also took the opportunity to lash out at freedom of navigation operations of the US, saying that it was the source of militarization of the South China Sea.

As if oblivious to what’s happening in the contested waters, He also dared to ask if there were any military vessels that encountered vessels while traversing the area.

“I’ve never encountered any comments that commercial, military vessels were obstructed when they traverse the South China Sea…There are no problems with freedom of navigation,” He said.

Read Next
Legarda echoes Duterte’s rhetoric: ‘Why go to war with China?’
EDITORS' PICK
We Can’t Guarantee You’ll Win a P20 Billion Jackpot, But We Can Help You Try
Sex on the menu for Pogo workers
SM continues to send relief assistance to remote towns in Batangas
First female commodore named
Foreigners prepare to flee as China virus toll tops 100
Best Gift Ideas in the Philippines
MOST READ
Sex on the menu for Pogo workers
Kobe Bryant’s body identified among helicopter crash victims
Virus outbreak death toll in mainland China rises to 132, cases increase to 6K
Kobe Bryant gear pulled out of Nike online store in wake of his death
Don't miss out on the latest news and information.