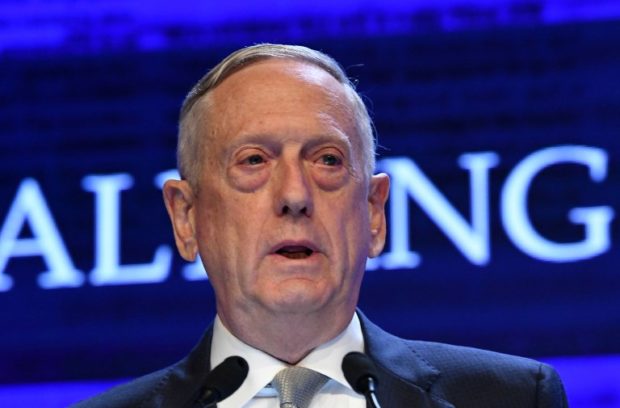 US Defense Secretary Jim Mattis delivers his speech during the first plenary session of the 17th Asian Security Summit of the IISS ShangriLa Dialogue in Singapore on June 2, 2018. AFP

SINGAPORE — US Defense Secretary Jim Mattis says China’s placement of weapons systems on man-made islands in the South China Sea is designed to intimidate and coerce other countries in the region.

Laying out a sharp criticism of Beijing, Mattis on Saturday also blasted Chinese President Xi Jinping for reneging on a 2015 promise made at the White House that China would not militarize the island features.

Mattis, in his remarks at the  high-profile security summit Shangri-La Dialogue, said China faced “larger consequences” for its military buildup and deployment of high-end weapons systems in artificial islands in the disputed waterway.

The Pentagon chief said Beijing had deployed a range of military hardware, including antiship and surface-to-air missiles and electronic jammers, on reefs and islets that it had transformed into hardened military facilities.

China has also landed nuclear strike-capable bombers on Woody Island in the Paracel Islands, the territory west and north of the Spratlys which is also being claimed by Vietnam.

“Despite China’s claims to the contrary, the placement of these weapon systems is tied directly to the military use for the purposes of intimidation and coercion,” Mattis said.

Beijing had faced few consequences for its buildup and sweeping territorial claims in the South China Sea and West Philippine Sea, the part of the former that is within Manila’s 370-kilometer exclusive economic zone.

Mattis said the recent move to disinvite China to the Rim of the Pacific exercises, the world’s largest naval and marines exercises hosted by the US, was only an “initial response” to China’s militarization of the islands.

“I believe that there are more, much larger consequences in the future when nations lose rapport with their neighbors,” he said.

“China’s policy in the South China Sea stands in stark contrast to the openness our strategy promotes. It calls into question China’s broader goals,” he added.

But Mattis said the US would continue to pursue a constructive, results-oriented relationship with China when possible.

“We are prepared and will support China’s choices if they promote long-term peace and prosperity for all in this dynamic region,” he said.

Mattis declined to give a categorical commitment on whether the Philippine-occupied features in the Spratlys in the West Philippine Sea are covered by the 1951 Mutual Defense Treaty.

While he said the United States stood by its treaty allies, he remained ambivalent about whether the treaty would apply in case an armed confrontation breaks out between the Philippines and another country in the West Philippine Sea.

“We stand by our treaty allies but this is a discussion between the current administrations in Manila and in Washington. It’s not one that can be answered as simply as your question would indicate,” he said in a question-and-answer session after delivering his remarks in the security forum.

The 1951 agreement signed by the Philippines and United States stipulates that both countries will come to each other’s defense against an armed attack.

“When we have discussions on these matters, the reason why public figures do not want to give specific answers is that these are complex issues … To simply turn it into a military and nonmilitary response is shortchanging the issue,” Mattis said.

“This is what diplomacy is all about, taking contrary perspectives and finding common ground,” he added.

Mattis’ response was in stark contrast to the solid commitment of the US to defend Japan in case of an armed attack.

In 2017, he said that Article 5 of the US-Japan Treaty of Mutual Cooperation and Security covered the Senkaku Islands, which Tokyo administers, in the East China Sea.

The Philippines, China, Taiwan, Vietnam, Malaysia and Brunei have overlapping claims in the South China Sea. But China claims most of the waters, demarcating its supposed territory with the controversial nine-dash line, and has asserted its claims by building military-grade artificial islands.

It was not the first time that US officials spoke in ambiguous terms on the extent of the PH-US Mutual Defense Treaty. Presidents Barack Obama and Hillary Clinton also gave uncertain assurances to Manila in the past. —With reports from AFP and AP