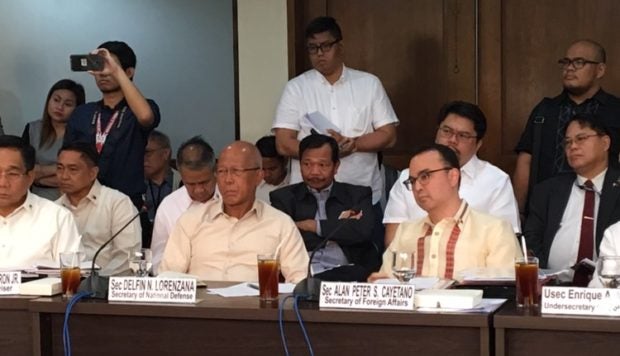 Foreign Secretary Alan Peter Cayetano on Wednesday denied doing nothing while China continued to build up its defenses in the South China Sea as lawmakers questioned the Duterte administration’s “seeming lack of response” to Beijing’s militarization of the strategic waterway.

National Security Adviser Hermogenes Esperon Jr. also parried suggestions of a cop-out, telling a news forum in Manila that President Rodrigo Duterte was ready to go to war if the Chinese harmed Filipino troops manning the Philippines’ outposts in the Spratly archipelago.

“The other night, the President said if his troops are harmed, that could be his red line,” Esperon said.

Following Malacañang’s line, however, Esperon played down China’s landing of long-range bombers on Woody Island in the Paracel archipelago, saying the island was not located in Philippine territory.

‘Are we the target?’

He also brushed aside reports that China had deployed antiship cruise missiles and surface-to-air missile systems on three reefs claimed by the Philippines—Kagitingan (internationally known as Fiery Cross Reef), Zamora (Subi) and Panganiban (Mischief)—saying they posed no danger to the country.

“Are we the target? Should we be alarmed? I don’t think so, because we are not at war with China,” said Esperon, a former chief of staff of the Armed Forces of the Philippines.

The President has taken flak in recent weeks for not confronting Beijing following news of the landing of H-6K bombers on Woody Island and the deployment of weapons on Philippine territory, with opposition lawmakers outraged by his saying he did not want to go to war with a far superior China.

On Wednesday, during a hearing called by the West Philippine Sea special committee of the House of Representatives headed by Rep. Feliciano Belmonte, Magdalo Rep. Gary Alejano took Cayetano to task for refusing to file a diplomatic protest against China’s aggressiveness in the South China Sea.

Although congressional inquiries into national security issues are usually held behind closed doors, the hearing called  by Belmonte’s committee on Wednesday was open to the public for three hours.

Responding to Alejano, Cayetano claimed the Department of Foreign Affairs had taken diplomatic action. “Several dozens, maybe 50, 100—I’ll have to count it—over the past two years,” he said.

Cayetano, however, loosely used the term “diplomatic protest” to refer to any expression of disagreement.

“We are not asking you to trust us blindly,” he added. “We have been filing a diplomatic protest, but the critics want us to announce it loudly. That is not conducive to the ongoing talks.”

Cayetano repeated this notion several times during the hearing as he fielded questions from the lawmakers.

At one point, Cayetano described confronting China in the court of public opinion as “the Aquino way, the Del Rosario, the Carpio-or-whatever-you-want-to-call-it way.”

He was referring to former President Benigno Aquino III, Foreign Secretary Albert del Rosario, and acting Chief Justice Antonio Carpio, who had been prodding the Duterte administration to protest China’s aggressive moves lest its silence be taken for acquiescence.

Cayetano described the administration’s approach as “prudent, patient and pragmatic” and characterized it as “the traditional building of trust through diplomacy.”

Not a shouting match

Alejano, however, said “filing a diplomatic protest is not a shouting match.”

“We are now submitting ourselves because we want to appease China on what they want,” he said, warning that China would eventually establish this as the “norm” that it would refuse to change.

Alejano also called out Cayetano for “always pinning the blame on President Aquino,” when the Duterte administration has already been in power for some time. —With a report from Jaymee T. Gamil and the wires