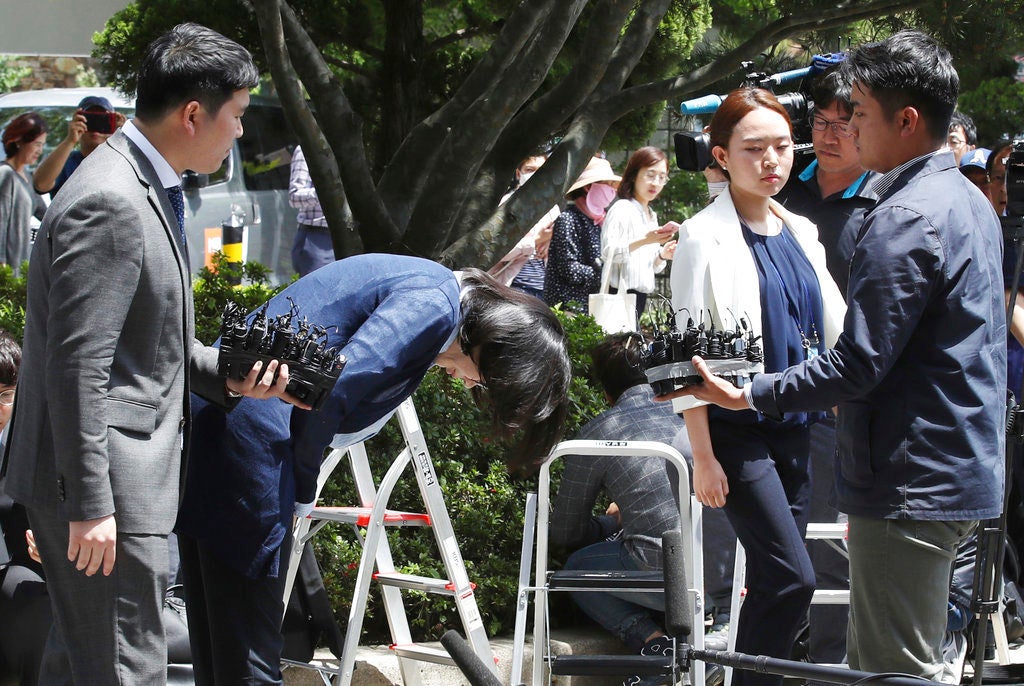 Cho Hyun-ah (center) bows before entering a Korea Immigration Service office for questioning in Seoul, South Korea on Thursday, May 24, 2018. Cho, the Korean Air heiress whose tantrum over nuts delayed a flight four years ago, is being investigated by South Korean immigration officials over suspicion of unlawfully hiring housekeepers from the Philippines. (Park Dong-ju/Yonhap via AP)

SEOUL, South Korea — A Korean Air heiress whose tantrum over nuts delayed a flight nearly four years ago is being investigated by South Korean immigration officials on suspicion she unlawfully hired housekeepers from the Philippines.

Cho Hyun-ah bowed and apologized on Thursday for “causing troubles” before entering a Korea Immigration Service office in Seoul for questioning.

Cho and her sister resigned from their executive positions at Korean Air in April following public criticism over their behavior as well as allegations that their family mistreated and abused employees. Investigators were also looking into suspicions that the Cho family, including the company’s chairman Cho Yang-ho, evaded taxes and used airline services to smuggle luxury goods.

Cho’s sister, Cho Hyun-min, is currently under investigation for allegedly hurling a cup of water during a business meeting.

In December 2014, Cho got angry after she was served macadamia nuts in a bag instead of on a dish and her tantrum forced the Korean Air plane to return to a boarding gate at New York’s John F. Kennedy Airport. She was released from jail in South Korea in May 2015 after the top court suspended her sentence over the case.

Immigration officials suspect Cho and her mother, Lee Myeong-hee, unlawfully recruited and hired about 10 to 20 housekeepers from the Philippines by documenting them as Korean Air trainees.

Under the South Korean law, foreign nationals must obtain visas given to marriage migrants or people of Korean heritage to work as housekeepers.        /kga