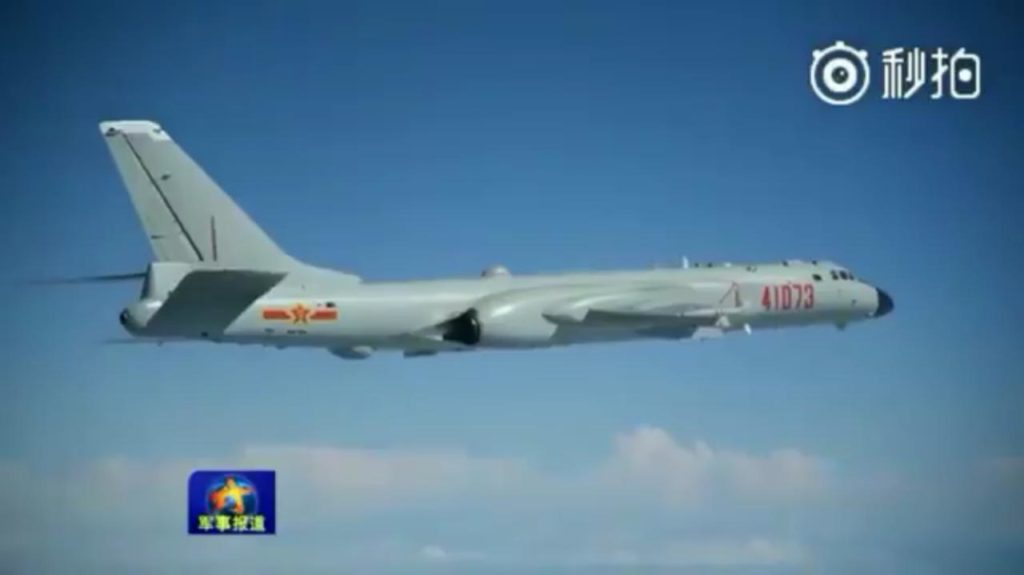 Photo by the People’s Daily

The Philippines has come within  easy reach of China’s top-of-the-line nuclear strike-capable bomber after the Chinese military demonstrated that it could operate from its artificial islands in the South China Sea, according to security analysts.

Upping the ante in the territorial dispute in the region, China’s People’s Liberation Army Air Force (Plaaf) said in a statement on Friday that some of its bombers recently conducted takeoff and landing training “on islands and reefs in the South China Sea in order to improve our ability to ‘reach all territory, conduct strikes at any time and strike in all directions.’”

It said the pilot of the  H-6K bomber conducted assault training and then carried out takeoffs and landings at an airport in the area, describing the exercise as preparation for “the West Pacific and the battle for the South China Sea.”

Wang Mingliang, a defense expert cited in the statement, said the exercise would help the Plaaf “strengthen its combat capability to deal with maritime security threats.”

The Plaaf’s statement did not provide the precise location of the exercise.

In an analysis published on its website, Center for Strategic and International Studies (CSIS) said the runway was believed to be on Woody Island, China’s largest base in the Paracel Islands, which is also claimed by Vietnam and Taiwan.

“I believe this is the first time a bomber has landed in the #SouthChinaSea,” Bonnie Glaser, director of the China power project at CSIS, said on Twitter. She expected an H-6K bomber would soon land on one of China’s artificial islands in the Spratlys chain that have runways.

The Paracels are north of the Spratlys where the Philippines, China, Taiwan, Vietnam, Malaysia and Brunei have overlapping claims.

“Nearly all of the Philippines falls within the radius of the bombers, including Manila and all five Philippine military bases earmarked for development under the US-Philippines Enhanced Defense Cooperation Agreement (Edca),” Amti said.

Malacañang declined to comment. There also was no statement from Foreign Secretary Alan Peter Cayetano, who was in Hawaii to meet with officials of the US Pacific Command.

Amti said the H-6K, an upgraded H-6, would nearly double the base aircraft’s combat radius and put all of Southeast Asia within range of Woody Island.

It said future deployments to the “Big 3” would bring Singapore and much of Indonesia within reach of even China’s lower-end bombers, while the H-6Ks could reach northern Australia and Guam.

The Big 3 are the Panganiban (Mischief), Kagitingan (Fiery Cross) and Zamora (Subi) reefs in the Spratlys where China had built artificial islands with runways. —With reports from Christine O. Avendaño, Dona Z. Pazzibugan, and the wires