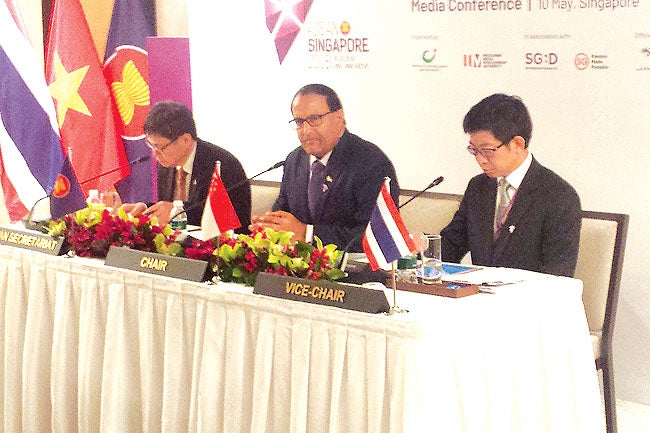 SINGAPORE — The 14th Conference of Asean Ministers Responsible for Information (AMRI) has upped the ante on the war on fake news with the adoption of a framework that will aim to minimise the harmful effects of such news.

Noting that the issue of fake news, especially on social media platforms, is a growing global challenge, the ministers agreed that there is a need for the regional grouping to collaborate and exchange best practices in combating it. Singapore Minister for Communications and Information S Iswaran informed a press conference on Thursday, while highlighting the joint media statement released at the end of the 14th AMRI Conference which started with a meeting of Asean Senior Officials Responsible for Information on May 8.

The ministers endorsed the framework and joint declaration to minimise the harmful effect of fake news which would provide a common frame of reference for ASEAN member states (AMS) to strengthen cooperation, share ideas and propose viable solutions to address the proliferation of fake news and its negative impact, for the benefit of the people of ASEAN, said Iswaran.

Singapore hosted the 14th AMRI and the Fifth Conference of ASEAN Plus Three Ministers Responsible for Information (5th AMRI+3).

The ministers also noted the progress of Analogue Switch-Off (ASO) by the respective AMS and acknowledged the need for AMS to strive towards meeting the 2015-2020 ASO timeline that was agreed at the 10th AMRI in Lao PDR in 2009 and at the 13th ASEAN Telecommunications and Information Technology Ministers Meeting (TELMIN) in Singapore in 2013.

The ministers approved the ASEAN-wide Technical Guide on Baseline Receiver Specifications for mobile and portable devices which would facilitate the adoption of digital TV in the region.

They agreed that long-term projects in the information and media sector have allowed AMS to enhance their mutual understanding of one another and contributed to a greater sense of belonging and community building.

The ministers also welcomed and adopted the Framework for Co-Production on AudioVisual Sector for ASEAN which would encourage content producers in the region to collaborate and co-create unique and compelling ASEAN content for the region and beyond.

They lauded the initiatives of the ASEAN Committee on Culture and Information (COCI) to expand its platforms and projects to encompass other stakeholders and players in the digital media field such as bloggers, photo-journalists and online content producers. These initiatives included Dream ASEAN, ASEAN Bloggers Exchange Programme, ASEAN Print Media Workshop and ASEAN Online Content Producers Workshop and so on.

Acknowledging that the digital revolution would bring about rapid development and shifts in the information and media landscape, the ministers agreed on the need for ASEAN to prepare its people to seize the opportunities and manage any challenges brought about by the digital revolution. They emphasised the importance of promoting digital literacy, including both media and information, within ASEAN.

The ministers adopted the Core Values on Digital Literacy for ASEAN which would help raise literacy levels and build the capability of the ASEAN Community to consume and produce content across all platforms confidently, safely and responsibly.

The ASEAN ministers appreciates China’s efforts in using broadcasting and publications to foster friendly ASEAN-China ties and good-neighbourly relations as well as the initiatives of China to cooperate with ASEAN through mutual visits and promotion of exchange of films and TV programmes through the ASEAN-China Cooperation Fund.

The ministers endorsed the new ASEAN-China Work Plan on Enhancing ASEAN-China Cooperation through Information and Media (2018-2020).

They welcomed the initiatives of China to further strengthen the cooperation with ASEAN media via joint interviews, training of media personnel and sharing of new media technologies and experience in their applications.

The ministers welcomed the initiatives of Japan in information and broadcasting, especially next generation broadcasting technologies, media and information literacy and capacity building programmes for media personnel.

The ministers noted the proposals from the Republic of Korea (ROK) on ways through which ASEAN and the ROK could collaborate to further advance media and information exchange through joint coverage and news programmes.

The ministers agreed to convene the 15th AMRI and its Related Meetings with dialogue partners in Thailand in 2020.