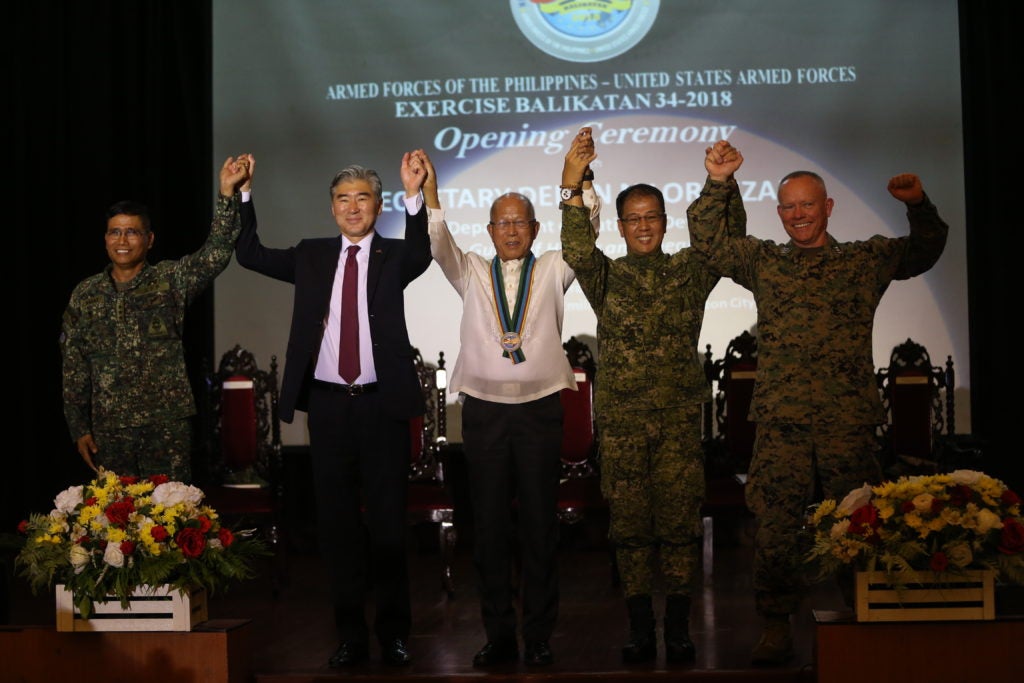 Philippine and US officials formally open Balikatan 2018 at a ceremony in Camp Aguinaldo, headquarters of the Armed Forces of the Philippines. —EDWIN BACASMAS

Up to 8,000 US and Philippine forces have begun their largest annual military exercises under President Rodrigo Duterte, who had wanted to scale down America’s military presence and involvement in combat drills as he sought closer ties with China and Russia.

The Balikatan exercises opened on Monday and were to involve combat drills in mock urban settings to train special forces in battling terrorists in cities, following the siege of Marawi City last year by local terror groups which had ties with Islamic State (IS).

After rising to power in 2016, the President vowed to scale back the presence of US troops involved in counterterrorism training in Mindanao and once threatened to end the annual drills with American forces, which were provided for by a defense treaty between the two countries.

The current exercises would be the largest drills with the United States since the President took office, though Filipino officials stressed they were not aimed at China, which had been accused of militarizing the West Philippine Sea.

“This exercise was scheduled whether those missiles are there or not,” said Marine Lt. Gen. Lawrence Nicholson, US exercise director, at a joint briefing with Philippine military officials.

US news network CNBC, citing sources with direct knowledge of US intelligence reports, said on Wednesday that China had deployed antiship cruise missiles and surface-to-air missile systems on Philippine-owned Kagitingan, Zamora and Panganiban reefs in the Spratly archipelago.

Nicholson said there were more US servicemen participating in the exercises this year.

“From my side this is Balikatan, it’s the same size and scope that it normally is,” Nicholson said. “We have four nations here ready to train so I don’t see anything a whole lot different,” he said.

At least 60 Australian and 20 Japanese military personnel were participating as observers in the 34th iteration of the Balikatan exercises.

At least 3,000 members of the US Marines, Army, Air Force and Special Operations Force were taking part, along with 5,000 Filipino soldiers.

“We are doing it because Balikatan is now on its 34th rotation,” Nicholson said. “It is good for all participants. It’s good for all our military forces and so to me nothing much has changed,” he added.

After announcing that the field exercises were off-limits to reporters, Filipino officials said these were open for coverage after all.

“We do not have an official declaration that we do not want (you) to cover the exercises,” said Lt. Gen. Emmanuel Salamat, exercise director.

“But we would like you to just highlight the significant part of the activity,” Salamat said. —Reports from AP, Jeannette I. Andrade and Frances Mangosing