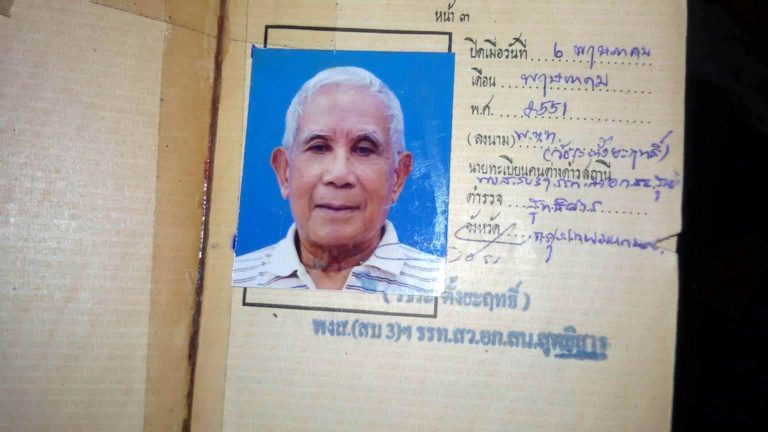 Lolo Ernesto will be home! Where? He does not know yet – Gapan, Nueva Ecija or Pasig City. But one thing is sure, it is in the Philippines.

Ernesto De Jesus San Juan, the 95-year-old living alone in Winning Tower a 22-storey building with 487 units located at Pridi Banomyong and Sukhumvit Road, Phrakhanong, Bangkok for the past 18 years or more. His registration book showed that he was employed by the Military Assistance Group (MAAG Laos) in November 1958-1963 and in Air America in December 1963.

After World War II, Ernesto San Juan was a mechanical engineering student at the University of the Philippines. He was not able to finish his course because he was recruited by a Vietnamese classmate to work in Laos. From Laos, he was sent to Florida to train in avionics. He met two Filipinos there. After their training, he did not meet them again.

Ernesto became a pilot and trained Hmongs and Laotians. Eventually, he claimed to have become a senior officer of MAAG. After it was pulled out of Laos, he was transferred to Air America.

James Wilson, an American veteran who worked at the military base in Udon Thani, Thailand in the ‘60s and ‘70s mentioned that there were a “few” Filipinos working for Air America, and they were good mechanics and at “least one became a pilot there.” Could that man be Ernesto?

‘What will I do in the Philippines?’

On April 23, two relatives from the Philippines flew to Bangkok to visit Lolo Ernesto. However, no names are shown in the information record of Winning Tower. Lolo Ernesto does not recall any relatives visiting him except the elderly Filipino sisters, Nits and Edna, both tenants of the Tower who bring him food every day.

Edna said that the two women informed her that they cannot immediately bring Lolo back to the Philippines because they needed to secure clearance and permit from the immigration since he might have been overstaying in Thailand.

When I arrived in Lolo’s unit, his bags are packed. He asked me if I came to take him home. I told him to tell me stories because he was crying.

“What will I do in the Philippines? I think I will just visit Pasig. Then I will go to Gapan,” he said talking to himself. Then he asked me again, “What will I eat?”

Lolo Ernesto was thinking of sinigang.

“My lolaused to cook sinigang. In Gapan, they used to make it with lots of ‘panuka,’vegetables in season and a lot more. But all these ended up the same – sinigang na baboy, or sinigang na isda,” he laughed.

Lolo Ernesto does not want to stay in Manila because he has no money. He said that his savings were all gone.

I stayed with Lolo Ernesto the whole day. He recalled his early days in Gapan and his first vacation in the Philippines after many years.

“The young people there called me Lolo E. They are not my relatives, but they were happy to see me,” he says.

Lolo Ernesto claimed that his kababayan will be happy to know that he is coming home because his family name is quite famous in Gapan.

“My father Cenon is a former mayor of Gapan. My mother is Genoveva. I was the only son because my father died early,” Lolo Ernesto said.

Nits expresses her happiness that Lolo will be reunited with his family. She and Edna take turns in bringing him food. The supplies come from concerned Filipinos.

“I’ve seen him a few times back then. But I never knew of his situation. He mostly kept to himself. It was only when he started asking for food that we knew of his story,” Nits said.

The Philippine Embassy in Bangkok does not comment on Lolo Ernesto’s plight. In an email sent yesterday by Mary Anne Padua, the charge d’affaires, regarding my request to meet with the family and to give light to Lolo Ernesto’s identity, it says that:

“The relative informed the Embassy that they will consult their other family members in connection with your request.”

“We hope that Lolo can really go home. But I hope they will take care of him. We love him like a father and we will surely miss him,” Nits said.

Lolo Ernesto is expected to go home for good on May 1.