Veloso’s mom: ‘Please continue to fight for Mary Jane even if I’m gone’ 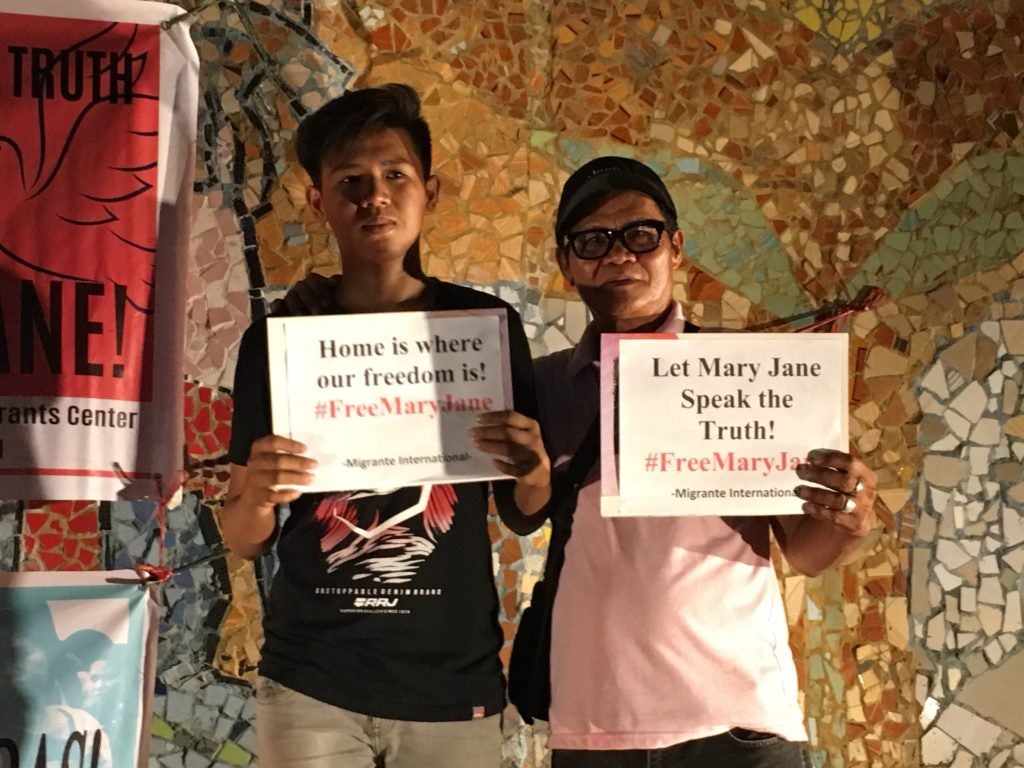 Mary Jane Veloso’s 15-year-old son Mac-mac and her 62-year-old father Cesar ask President Duterte to use his power to compel the courts to allow her to testify against her Filipino recruiters and prove her innocence, during a short program in Baclaran Church, Parañaque on Sunday, April 29. This also marks the 3rd year after Veloso was spared from execution in Indonesia for smuggling illegal drugs. PHOTO BY DEXTER CABALZA

Three years have passed after the Indonesian government postponed the death sentence against human trafficking victim Mary Jane Veloso, but the fear and anxiety in her family has not waned as her fate of being saved was still unclear.

Her mother, 58-year-old Celia, has led the fight for her freedom, even flying to the Indonesian prison in April to appeal to the government there Veloso’s innocence.

The spirit is strong, but the flesh is weak for Celia. In her video message, she thanked those who had helped their family, but also asked to continue Veloso’s fight, as if leaving her will.

(I am feeling many kinds of ailments and it scares me. My vision is already blurry and my body is weakening.)

(I just want Mary Jane to be back home before I am gone. I am asking those who supported us to still continue doing it until Mary Jane is freed.)

According to Mary Jane’s father Cesar, they were expecting Celia to be able to visit their daughter in Yogjakarta prison as early as April 26. However, Celia only got a permit to visit her a week after, or on May 4 or May 5.

In a short program in Baclaran Church on Sunday evening, the 62-year-old father appealed to President Rodrigo Duterte to use his powers to exonerate his daughter and save her from death.

Let her speak to prove her innocence

“I ask our dear President, Mr. Duterte, if it’s really your promise to get rid of drugs, then let my daughter talk in the court and point [out] how she became a victim of drug trafficking,” he said.

Veloso, who escaped from an attempted rape in Dubai and fled to Indonesia to find work, had said she was tricked into smuggling 2.6 kilos of heroin inside her suitcase in 2010. Smuggling drugs into Indonesia is punishable by death.

Veloso was supposed to be executed on April 29, 2015, but the Indonesian government granted her a last-minute reprieve so she and the Philippine authorities could go after her recruiters and members of a transnational syndicate that smuggled illegal drugs into Indonesia.

She was the only one spared among the “Bali Nine” from being executed through a firing squad.

In December last year, the Court of Appeals barred a Nueva Ecija judge from taking the testimony of Veloso from her prison against Maria Cristina Sergio and her live-in partner Julius Lacanilao, whom she accused of recruiting her as a drug mule.

The Veloso family was expecting their motion for reconsideration to be resolved before May 1, or Labor Day.

Should the CA reject their appeal, Veloso, through their counsels from the National Union of People’s Lawyers, would turn to the Supreme Court.

On Monday, April 29, labor groups led by Migrante International staged programs around here and abroad to mark the Global Action to Save Mary Jane. Vigils were held by Filipinos and foreigners in Indonesia, Canada and Hong Kong, among other countries.

According to Migrante, Veloso was among the more than 130 Filipinos on death row and thousands of others serving jail sentences in other countries.

Celia reiterated their cry for justice for her daughter, who was detained for the past eight years.

“Once again, I am appealing for help from our government to grant justice, not just for Mary Jane, but also for all those who are in death row and destined in many countries,” she said. /je