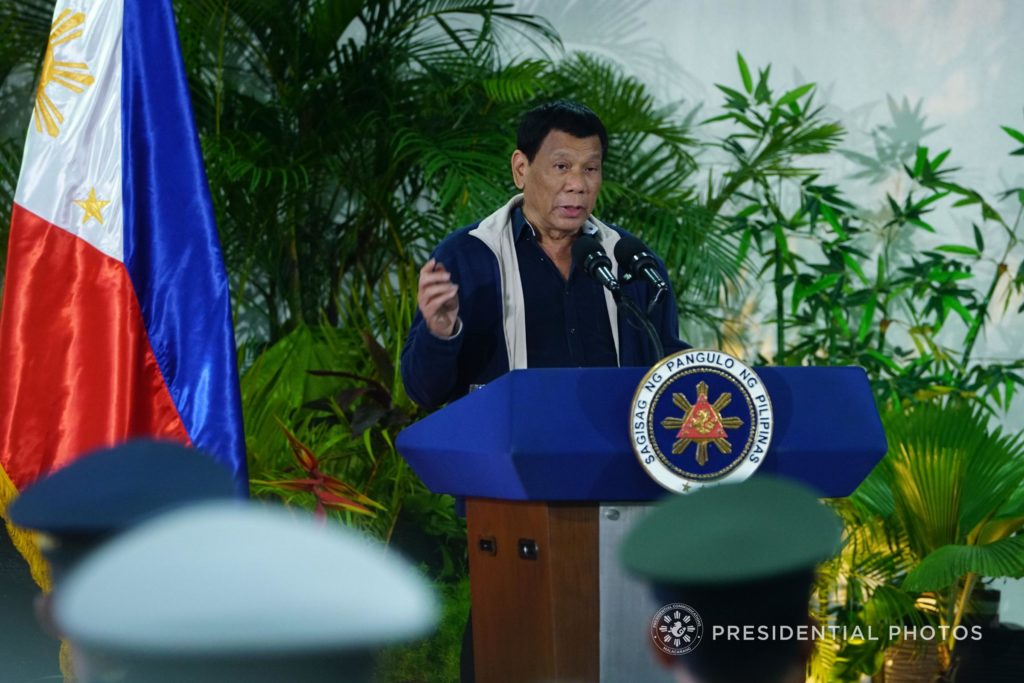 President Rodrigo Roa Duterte, in his speech upon his arrival at the Francisco Bangoy International Airport in Davao City at dawn of April 29, 2018, the he and other heads of states from Association of Southeast Asian Nations (ASEAN) member countries should uphold and honor the time-honored principles of sovereign equality and non-interference in internal affairs. JOEY DALUMPINES/PRESIDENTIAL PHOTO

DAVAO CITY — A diplomatic row between the Philippines and Kuwait turned for the worse on Sunday after President Rodrigo Duterte scrapped a deal on the humane treatment of overseas Filipino workers (OFWs) and declared the temporary ban on their deployment to the oil-rich Gulf state permanent.

Mr. Duterte temporarily banned the deployment of new workers to the Gulf state in February following the murder of housemaid Joanna Demafelis, whose body was found inside a freezer in a Kuwait City apartment that was abandoned by her Arab employer.

The crisis deepened last week after Kuwaiti authorities ordered the expulsion of Philippine Ambassador Renato Pedro Villa over a Philippine Embassy mission to rescue maltreated maids, which Kuwait considered a violation of its sovereignty.

The Philippines had apologized over the rescue mission but apparently that was not enough to appease Kuwait.

The two nations had been negotiating a deal on the regulation of working conditions of OFWs in Kuwait that Philippine officials said could lead to the lifting of the deployment ban.

But last week’s escalation of tensions had put the agreement in doubt. On Sunday, Mr. Duterte said the Philippines would no longer pursue the deal and the deployment ban would be made permanent.

“The ban stays permanently. There will be no more recruitment especially of domestic helpers. No more,” Mr. Duterte told reporters in Davao City after returning from Singapore, where he attended the 32nd Leaders’ Summit of the Association of Southeast Asian Nations (Asean).

Around 262,000 Filipinos work in Kuwait, nearly 60 percent of them as domestic helpers, according to the Department of Labor and Employment.

On Saturday, Mr. Duterte described the treatment of Filipinos in Kuwait as a “calamity.”

He said he would bring home the maids who suffered abuse in Kuwait and called on the other OFWs who wanted to stay there to come home, appealing to their sense of patriotism.

“I would like to address to their patriotism: Come home. No matter how poor we are, we will survive. The economy is doing good and we are short of our workers,” he said.

Labor Secretary Silvestre Bello III, however, still planned to travel to Kuwait to assess the situation.

“We intend to make an assessment of the situation there and will try to talk to my counterpart and see how we can [solve] the problem,” Bello told reporters in Singapore before flying back to Manila after attending the Asean summit.

On Sunday, Mr. Duterte said his administration was considering redirecting OFW traffic from Kuwait to China and other countries.

“China is also getting some 1,000 teachers. Maybe we can give them the preference,” he said.

“This aging societies, [among them] Japan, there would be a lot of caregivers [needed],” he said, adding that the Technical Education and Skills Development Authority could help train applicants.

“Many countries today are suffering from the shortage of [young people]. They don’t want to bear children, like the Japanese,” he said.

Mr. Duterte also said the government would “look for jobs” for OFWs returning from Kuwait.

He said some of the OFWs could take up jobs in Luzon, where “many [projects are under construction].”

“That’s the ‘Build, Build, Build,’ and also in Mindanao. You just wait for about a few months,” he said, referring to his administration’s infrastructure program.

The Chinese government, he said, is already preparing to take on projects, including building a bridge that will link Davao City to Samal Island, he said.

Too many coming home

Mr. Duterte acknowledged that too many OFWs would be returning from Kuwait jobless.

“There are aplenty of them. That’s the reason why I am as worried as you. Many of them went there undocumented and those who are really victims of recruiters,” he said.

But the government, he said, could use the “almost P4.6 billion” that Chinese President Xi Jinping had given to the Philippines as economic assistance.

“It’s good the money is there, it was being kept. I was intending to use the money to rebuild or refurbish the hospitals outside of Metro Manila,” he said.

But now, he said, he would use the money to help OFWs who would be displaced by the diplomatic row with Kuwait.

“And once we start to withdraw all Filipinos there in Kuwait, maybe I’ll tell you the result of our intervention [on] behalf of our countrymen,” he said.

He added that part of the money could be used to settle the cases of about 700 OFWs facing charges in Kuwait courts.

Mr. Duterte said he was not after “vengeance” against Kuwait and did not “nurture hate.”

So many Filipinos are working in Kuwait to put their children through school and for that “I’m grateful,” he said.

But the Philippine also helped Kuwait during the 1991 Gulf War.

“So it evens up everything,” he said. —With reports from Christine O. Avendaño and AFP