Pact between 2 Koreas a triumph of ‘Asian way of diplomacy,’ says ex-senator 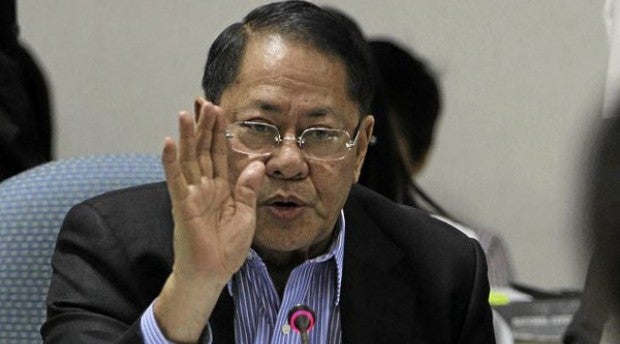 It was the triumph of the “Asian way of diplomacy,” former Sen. Edgardo Angara said on Saturday, describing the historic denuclearization pact signed by Kim Jong-un of North Korea and Moon Jae-in of South Korea, which signaled a breakthrough for peace in the Korean Peninsula.

“That is what we call a dialogue of silence,” said Angara, a special envoy to the European Union.

He took note of the smiles and warm body language between the two leaders during the summit, which seemed to portend a friendly conclusion to decades-long conflict on the Korean Peninsula.

“That’s the classic strategy among Asians, of making peace without words,” Angara told the Inquirer in a phone interview.

The former senator said Kim and Moon displayed a type of diplomacy unique to Asians, which offered a stark alternative to the tougher and more confrontational Western way.

Leaders of Europe and North America, in talking and negotiating peace settlements, would tend to be preoccupied with “hard bargaining,” often with arbitration by other parties, Angara said.

“The problem with hard bargaining is they don’t result in any resolution. There is no human touch, no person-to-person touch. It’s a very formalistic method,” he added, noting the increasingly hostile approach of the United States in the Middle East.

In contrast, the demeanor of Kim and Moon on Friday encapsulated the Asian tendency to give importance to nonverbal cues and actions that were rich with symbolism and meaning, Angara said.

This was best observed, he said, in how the North and South Korean leaders held hands and laughed together, as well as in the informal meeting of their wives, and the ceremonial planting of a commemorative pine tree to mark the occasion.

During the groundbreaking, Kim and Moon applied soil from each of the two highest peaks of North and South Korea, symbolizing unity and friendship, the EU envoy said.

“It’s the small things like that. That’s the Asian way,” he said.

Angara said the Philippine government would do well to pursue that kind of diplomacy in its own peace negotiations with both Moro and communist insurgents.

He added that the Asian way was also the best approach for the Philippines in choosing its leader.

Though it might be tempting to elect a “strongman,” Angara said a better choice would be a steady leader who would bring in different voices in decision-making.

This was the theme of his lecture on Friday for students of National Defense College of the Philippines at Camp Aguinaldo in Quezon City.

“When we look at our next leader, we must judge him to be a very steady leader, a man who has his own conviction, a man who looks into the future rather than the past,” he told the military students.

“Should it be a strongman? I don’t think that kind of a one-man strongman rule is acceptable anymore. What the people can accept is a consultative leader,” Angara said.

The Philippines may benefit under an authoritarian ruler similar to the late Singapore leader Lee Kuan Yew but the government must ensure that political power remains civilian in character, he said.

“That doesn’t mean he will not decide, but he will decide on the basis of consultation. That makes his decisions more effective and effectual, and the people will themselves protect him in case a disruptor comes out, because he is trustworthy,” Angara said.

“It cannot be a one-man rule. He must bring in different constituencies,” he said. /atm