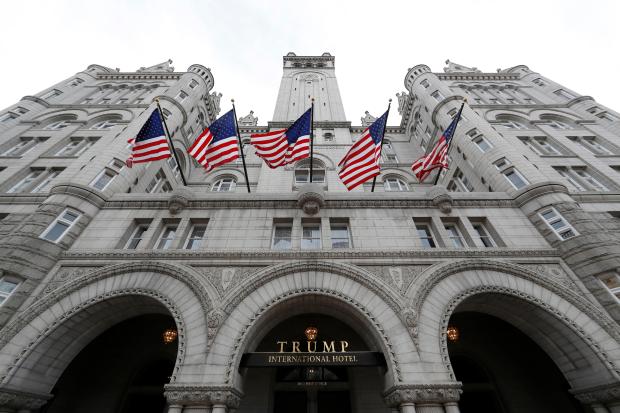 This photo taken Dec. 21, 2016, shows the The Trump International Hotel on Pennsylvania Avenue in Washington. (Photo by ALEX BRANDON / AP)

It is the latest foreign government to book rooms or host events at the Trump International Hotel in Washington DC, riling critics who say such bookings are nothing more than attempts to curry favor with President Donald Trump.

The Philippine Independence Day celebration set for June 12 comes as the country pushes for a free-trade agreement with the US and amid international criticism of President Rodrigo Duterte for encouraging vigilante killings of drug suspects.

“The Trump hotel may have some political undertones because it is associated with the US president,” Jose Manuel Romualdez, the Philippine ambassador to the US, wrote in a column in The Philippine Star newspaper earlier this week. “But since several other embassies have also held their national day celebrations at the Trump hotel which were well attended – I decided – why not do it there, too.”

The Philippine Embassy has sent out 300 invitations for the party to mark the 120th year since the country broke from Spanish rule.

Guests, including US senators and Congress members, will nosh on Filipino food and cocktails. The embassy didn’t directly respond to questions on whether the booking was intended to influence the president, referring instead to the ambassador’s column.

“The Philippines has found a way to pay tribute to our president,” said Kathleen Clark, a government ethics lawyer and law professor at Washington University in St. Louis. “What’s at risk is our foreign policy, that it will be influenced not by what matters – human rights, civil rights or legitimate economic interests — but by the Philippines’ ability to get in the good graces of our president.”

Coincidentally, the party comes a day after the next scheduled hearing in the federal court “emoluments” lawsuit by the state of Maryland and the District of Columbia.

They are accusing Trump of accepting unconstitutional gifts from foreign interests, specifically by throwing events and booking rooms at the Trump Washington hotel.

Such bookings are tantamount to bribes, the plaintiffs argue, because Trump’s refusal to divest himself from his businesses means the money paid for rooms, meeting spaces, food and drinks eventually finds its way into his pocket.

Trump has sought to assuage concerns about foreign government spending at his properties by offering to donate profits from such business to the US Treasury.

But critics say the gesture has lacked transparency. A Trump Organization payment of $151,470 last month was intended to cover such profits from 2017, but the company refused to provide details on how the figure was calculated and which foreign governments were involved.

Neither the White House nor the Trump Organization responded to requests for comment.

The Philippine president has reason to be plenty thankful to Trump, and to continue to keep him happy.

Western countries and human rights groups have denounced the Philippine leader for an anti-drug campaign that has included more than 2,000 extrajudicial killings by masked gunmen on motorcycles and others. But Trump has said the President was doing a “great job” with his crackdown.

There are economic concerns, too. With Trump’s decision to drop out of the Trans-Pacific Partnership agreement, Duterte has to find another way to knock down barriers to an open exchange of goods and investment. He has been pushing for the kind bilateral free trade deal that 20 other countries enjoy with the US.

Antonio’s company is partnering with the Trump Organization in a Trump-branded apartment complex in Manila in which Trump received between $1 million and $5 million in royalties, according to financial disclosure forms filed in June.

Since Trump took office last year, Kuwait has twice held its annual “National Day” celebration at his Washington hotel. Bahrain also celebrated its own “National Day” at the hotel, and a public relations firm working for Saudi Arabia has used the hotel, too.

Two Turkish business organizations sponsored an event there in 2016. One of those groups had official ties to the government of Turkey. The Turkish group was previously headed by a businessman who hired former Trump administration national security adviser Michael Flynn and his consulting firm to perform work aiding Turkey.

Flynn has since pleaded guilty to lying to the FBI and is cooperating with the special counsel’s investigation into Russian meddling in the 2016 election.