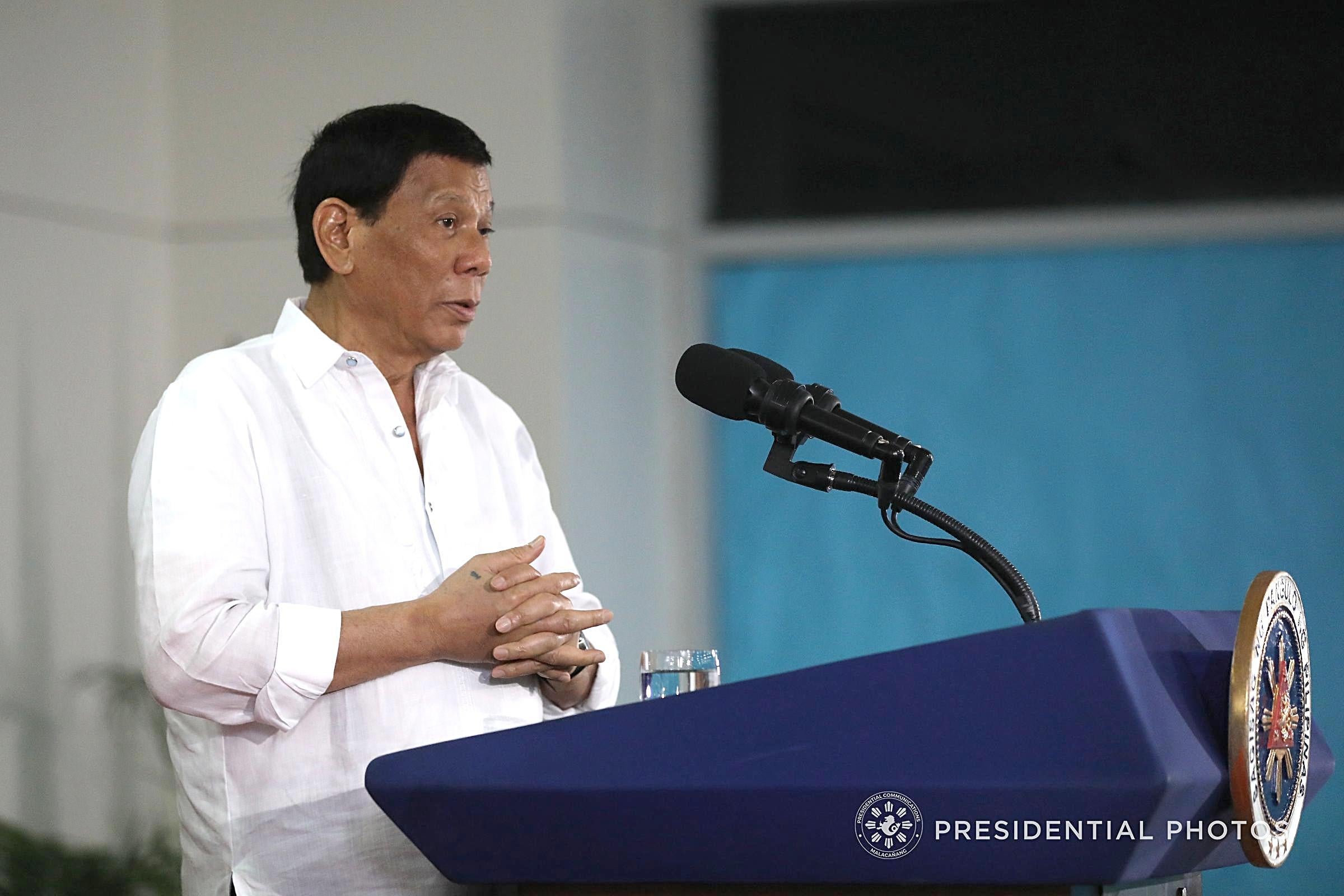 President Rodrigo Duterte delivers his speech during the 102nd Annual Communication of the Most Worshipful Grand Lodge of the Free and Accepted Mason in the Philippines at the SMX Convention Center in Davao City on April 26, 2018. TOTO LOZANO/PRESIDENTIAL PHOTO

DAVAO CITY – President Rodrigo Duterte said contrary to perceptions, he had asserted the Philippines’ claim on the disputed territory before Chinese President Xi Jinping and other Chinese officials when he first visited China in October 2016.

In a transcript of the speech he delivered during Thursday’s 102nd annual communication of the Grand Masons here, which Malacañang released on Friday, President Duterte recounted sitting on a long table with Philippine officials and faced Xi and his Cabinet on the other side during the bilateral talks.

“And in front of a full cast Cabinet, we were all there in a long table on the other side facing the Chinese counterpart,” he said.

President Duterte said he told Xi that “the Philippines has a stake in the West Philippine Sea which you call the South China Sea. I will go there and dig my oil.”

“Xi Jinping told me, ‘Well, you know, Mr. President, we just renewed our ties. We are friends again. Please do not spoil everything.”

“I said, but I…I want to respect our friendship, but how about the oils there? We need money. My country is poor. You are all lucky you guys have the oil fields. Malaysia, Indonesia. I don’t know why, but we do not have the oil. If we had the… if we had oil, things would have move better for us. It’s the oil that is really the… the blood of planet earth. It runs everything,” he narrated his reply.

President Duterte said Xi had told him: “I’m afraid if you do that, there will be trouble.”

“What do you think the Chinese would have meant when he said, ‘there will be trouble?’ Am I going to send my troops there, my marines? It will be a massacre. It is a war that I can never, never win and sacrifice the lives of Filipinos,” he said.

President Duterte said what Xi did was to offer the country help.

“Anyway, China has offered joint exploration and joint operation. And I said, maybe, we give you a better deal, 60-40,” he said.

“You cannot go against anybody. You cannot fight there. But President Xi is a friend. (He said) ‘we’ll share with you,’” he added.

President Duterte said if the Philippines insisted on its claim and China decided to go to war, the US could not defend Filipinos.

“And so if there’s going to be war, the United States itself would be busy defending itself from the missiles coming from Russia and China,” he said, adding that China and Russia “in the matter of the arms race, apparently, Russia and China has gone into a parity, or if not, a little bit higher.”

“Now, there are a lot of Filipinos who say that I have been trying to appear weak. I do not want to confront China,” he said.

President Duterte said he preferred to be friends with China because it is closer to the Philippines than the US and other western allies.

“We are friends with America, no doubt about it. We have the RP-US pact, military. But the provisions there says that if we go to war, we have to ask from each other’s Congress for the authority,” he said.

President Duterte said even when China was still building structures in the West Philippine Sea, the US did not raise a howl.

“Who was the power that could have stopped it on time? It was only America. He could’ve sent his armada there, the Seventh Fleet there. And say, ‘hey, guys, you cannot build artificial islands in the high seas. That’s not allowed. It ain’t allowed,” President Duterte said.

President Duterte said what the US did not raise howl against was “now a military garrison.”

“Now, at that time, who could’ve stopped it? Tell me. Philippine Navy? Marines? And there will be a massacre,” he said.

“Now you expected me now and they’re pushing me to go hard against China,” he added.

President Duterte said his friendship with Xi had resulted in many benefits to the country, such as China’s delivery of firearms.

“So I was grateful. What am I supposed to react?” he asked.

President Duterte said it was also the same tact he used in dealing with Russia.

“Precisely I said, with the issue of the China Sea, leave it at that, it’s geopolitics,” he said, noting that “if you are afraid that I would allow other countries, other powers to (help) and finance our own requirements of the Armed Forces that cannot happen.”

But President Duterte said the country would vigorously defend the Philippine Rise from intrusion.

He pledged to sail to the Philippine Rise next week.

“I’m going to the Benham Rise. And I will make a statement that nobody but nobody owns this place including the continental shelf, the underground landmass that extends under the sea,” President Duterte said.

Read Next
PH-Vietnam bilateral talks tackle rice imports, Abu Sayyaf
EDITORS' PICK
Is it safe to talk politics again at family gatherings? ‘The Reconciliation Dinner’ shows us what that’s like
The Best Tech Gifts For The 2022 Holidays
Pagasa: Warm, sunny Sunday in most parts of PH
House energy committee chair Arroyo bats for cheap electricity
EDITORIAL: To a bike-friendly future
vivo’s coming to town to grant wishes with more holiday promos
MOST READ
LOOK: Vhong Navarro transferred to BJMP detention facility in Taguig
The Elephant Man in the Senate
Posh village as ‘shabu’ haven
LOOK: Zanjoe Marudo bonds with Ria Atayde, her family
Don't miss out on the latest news and information.