Duterte to address PH arbitral victory ‘in due time’ – Roque 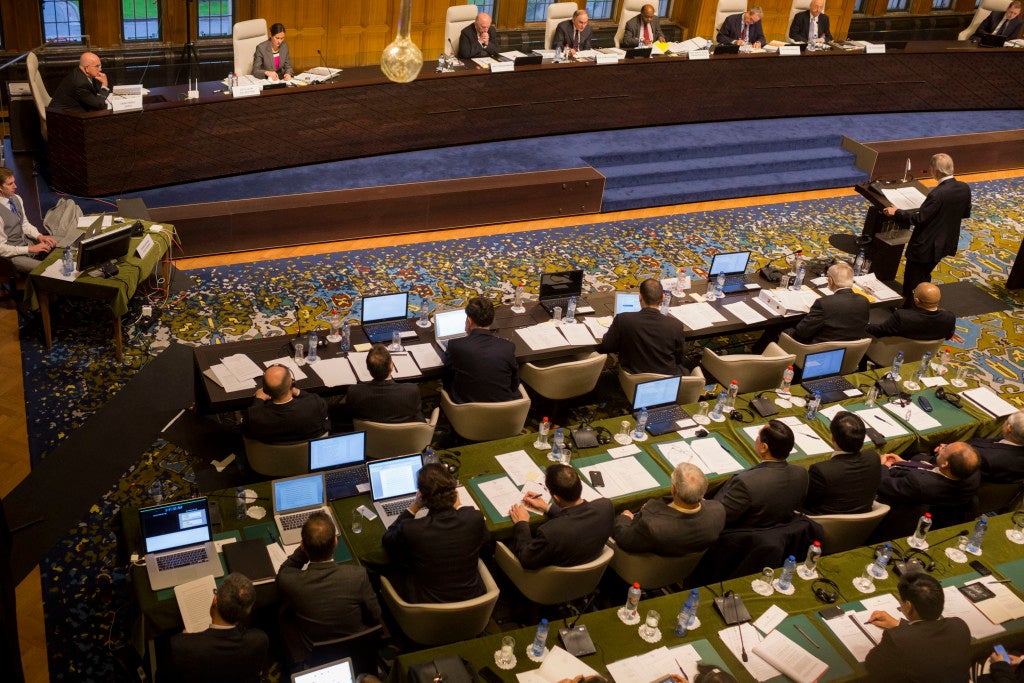 The arbitral tribunal in The Hague.

SINGAPORE — President Duterte assured Vietnamese Prime Minister Nguyen Xuan Phuc on Friday night that he will address at the right time the Philippine’s victory on the arbitral tribunal decision over its dispute with China over the West Philippine Sea.

The two leaders met for a bilateral meeting at the sidelines of the 32nd Association of Southeast Asian Nations (Asean) leaders’ summit here.

“The President made it clear that he will address the arbitral award in due time,” Presidential spokesperson Harry Roque told reporters as he noted this was for him “important” given that this was the first time he heard President Duterte made a statement that he would not abandon  and would not set aside the arbitral ruling.

Likewise, he said it was the first time the Chief Executive made such statement to a head of state that “he recognizes the gains of the arbitral award and that he will refer to the arbitral award in due course because he wants the totality of the West Philippine Sea settled under the rule of law and pursue to the binding norms of the UN Convention on the Law of the Sea.”

The President made the statement to Nguyen whose country happens to be also vocal about its opposition to China’s expansion activities in the disputed South China Sea.

But Roque also said the President made it clear to Nguyen that this victory was only “a victory for the Philippines because it is only binding to the parties in the arbitration.”

Roque said it was Nguyen who brought the issue up to President Duterte because the latter was appealing for support for a joint filing of Malaysia and Vietnam’s claim on an extended continental shelf in the South China Sea.

He said Nguyen was lobbying to other countries to support its submission.

Roque said that Nguyen praised the position of the President on his statements on the arbitral award.

With this statement that the President was not abandoning the arbitral award, Roque expressed hope that Supreme Court Acting Chief Justice Antonio Carpio and all other critics of the President “will now keep quiet because this is now a statement of the Philippine president to another head of state that he will not abandon, he is not reneging, relinquishing or ignoring in any way” the arbitral decision.

Asked whether China will act negatively on the President’s discussion with Nguyen about the South China Sea issue, he replied in the negative, adding that both countries have their own bilateral discussions as well.