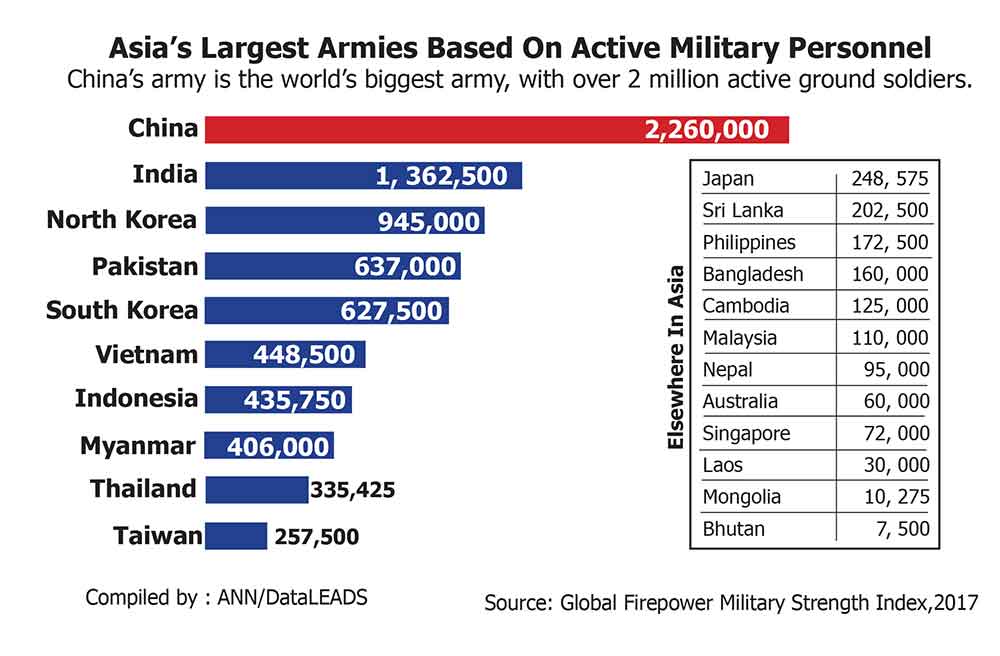 China has the military strength of around 2.2 million army personnel. The People’s Liberation Army was founded in 1927 and constitutes of ground force, naval force, air force and armed police as well.  In China, the military service is compulsory by law although the country has always seen its citizens volunteering for army. The average age of the army personnel are between 18 and 49 years.  Chinese army is considered the strongest in the world, only behind US in its equipment capacity.

The Indian Army is ranked second in size and has around 1.3 million soldiers.  Originated from the armies of the East India Company, each regiments of the Indian Army has diverse history and have participated in a number of battles and campaigns across the world.

North Korean Army is ranked third in Asia with a military strength of slightly less than 1 million. The Korean People’s army (KPA) established in 1948 has five branches which constitutes of ground, navy, air, Special Rocket Forces and Special Operation Forces.

Pakistan is ranked fourth in Asia with a personnel strength of 6,37,000. Established in 1947, The Pakistan Armed Forces comprises of three main divisions; army, navy and air force. The Pakistan army maintains close relationship with its Chinese counterpart since both the countries consider India a competitor and rival in the region. Military service is voluntary in Pakistan however President can enact conscription with the approval of the parliament.

South Korea has 627,500 active military personnel that make it fifth strongest in Asia. Established in 1948 after the division of Korea, Republic of Korea Armed Forces comprises of army, navy, air force and marine corps. With the increasing tension between two Koreas both the countries have been spending more on their military.

Vietnam has more than 448,500 strong personnel in its army. Indonesia, Myanmar and Thailand are other Asian countries that have significantly large armies. Thailand has 335, 425 active military personnel, more than Taiwan and Japan.

The Japanese army known as Japan Defense Force is mainly engaged with the UN peace keeping forces, however with the recent developments in the region with respect to threat from North Korea, there has been a debate about the primary role of  JDF.

Sri Lanka has an active military strength of 202, 500 that makes it twelfth largest army in Asia. It is followed by Philippines and Bangladesh, each having a standing army of 172, 500 and 160, 000 respectively.