US, Japanese, Australian warships dock in PH this week amid sea tensions 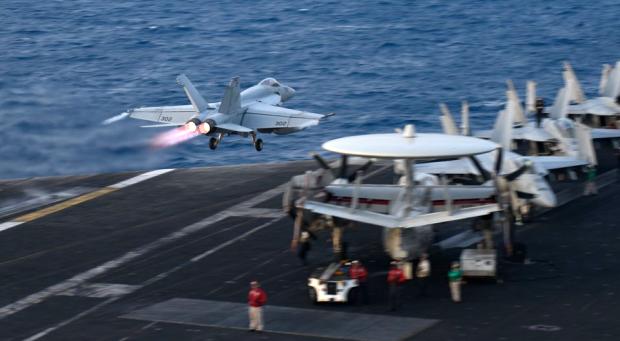 In this photo, taken Saturday, April 7, 2018, an F/A-18E Super Hornet launches from the flight deck of the aircraft carrier USS Theodore Roosevelt (CVN 71), somewhere in the South China Sea as headed for a regularly scheduled deployment in the US 7th Fleet area of operations. (Photo by Mass Communication Specialist 3rd Class ANDREW LANGHOLF / US Navy via Facebook)

Some warships of the Philippines’ traditional allies – US, Japan, and Australia – are set to dock in the Philippines this week for port visits amid escalating tensions in the South China Sea.

The USS Theodore Roosevelt arrived in Manila on Wednesday for a port visit, the US Embassy announced.

The nuclear-powered aircraft carrier is on a Western Pacific deployment. It sailed the disputed South China Sea before it arrived in Manila.

“The Theodore Roosevelt Carrier Strike Group will continue on their regularly scheduled Western Pacific deployment after departing Manila, conducting a variety of operations, including addressing shared maritime security concerns, building relationships with partner navies and enhancing interoperability and communication with partners and allies throughout the area of operations through exercises and visits,” the warship’s public affairs said in a statement.

The US, which claims it will continue to allow vessels to sail wherever international law allows, has three aircraft carrier strike groups currently within or around the South China Sea.

Royal Australian Navy vessels Her Majesty’s Australian Ship (HMAS) Anzac (FFH 150) and logistics vessel HMAS Success (OR 304) are scheduled to arrive on Thursday at Alava Wharf in Subic for a four-day goodwill visit, the Philippine Navy said in a media advisory.

Japanese destroyer JS Akizuki (DD-15) with one SH-60J patrol helicopter from the Japan Maritime Self-Defense Force will arrive on Friday at Alava Wharf. It will stay there until Monday.

The port visits come as superpowers US and China demonstrate their power in the hotly contested waterway.

The USS Carl Vinson has been sailing the South China Sea in the past few weeks. Last month, it made a historic port visit to Vietnam, the most vocal among the claimant countries. It was the first US warship to do so after the Vietnam War in 1970s.

Analysts say that the visit and the bolstered military ties of the two countries were aimed at sending a message to China as it continued to assert its influence in the disputed waterway.

The US later sent its guided missile destroyer USS Mustin for a freedom of navigation operation within 12 naitical miles of Mischief Reef, one of China-controlled islands in the Spratly archipelago.

It’s the largest of China’s seven outposts in the Spratlys, located within the 200-nautical mile exclusive economic zone of the Philippines.

In 2016, the Permanent Court of Arbitration (PCA) in The Hague ruled that this reef belongs entirely to the Philippines and it has sovereign rights over the area.

China condemned the US operations, accusing it of “serious provocation.”

In response to the US, the Asian giant displayed its naval might recently by holding its largest naval exercises to date in the disputed seas. It sent dozens of warships and its first and only operational aircraft carrier, as seen in satellite images.

China claims the drills were “routine” and not aimed towards any country.

China continues to claim most of the South China Sea, despite the PCA ruling invalidating its aggressive claims.

The Philippines, Vietnam, Malaysia and Brunei also have their claims on the disputed seas. /atm