No Filipino hurt after van hits crowd in Germany – DFA 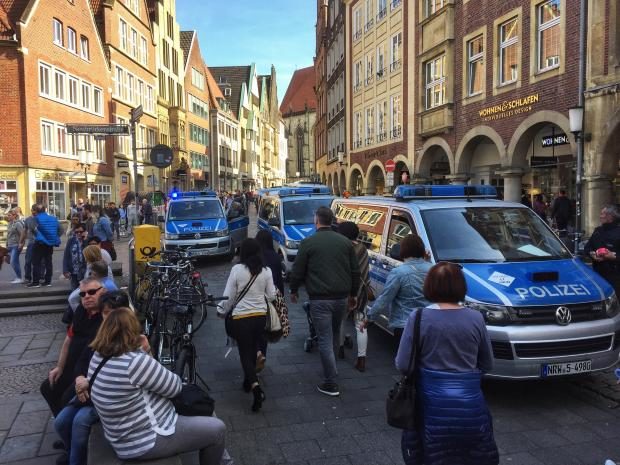 Police vans stand in downtown Muenster, Germany on Saturday, April 7, 2018. German news agency dpa says several people were killed after a vehicle crashed into a crowd sitting in front of a pub in the city of Muenster. (Photo from dpa via AP)

No Filipino was hurt in Muenster, Germany where a van crashed into a crowd in front of a bustling downtown pub, leaving three dead and more than 20 injured, the Department of Foreign Affairs (DFA) confirmed on Monday.

“We have been informed by Honorary Consul Heinz-Peter Heidrich that our kababayans in Munster and the rest of North Rhine-Westphalia are safe and accounted for,” DFA Secretary Alan Peter Cayetano said in a statement, quoting the report of Chargé d’Affaires Lilibeth Pono of the Philippine Embassy in Berlin.

Cayetano said that about 4,200 members of the Filipino community in Muenster and the rest of North Rhine-Westphalia were reported safe and accounted for by the Philippine Honorary Consul in Essen, Germany.

“Our thoughts and prayers are with the loved ones of those who lost their lives in the tragedy in Munster,” the DFA chief said, “We also pray for the speedy recovery of those who were injured in the incident.”

READ: 3 dead, 20 injured a van crashes into crowd in Germany

On April 7, the Philippine Embassy in Berlin warned the more than 22,500 Filipinos in Germany to be vigilant after a man deliberately drove his van into a crowd of pedestrians in downtown Munster, 475 kilometers from Berlin.

“Three persons, including the van driver, were killed and at least 20 others injured in the incident that German authorities said had nothing to do with terrorism,” the DFA said.