Roque: President is serious in offer to take in Rohingya refugees 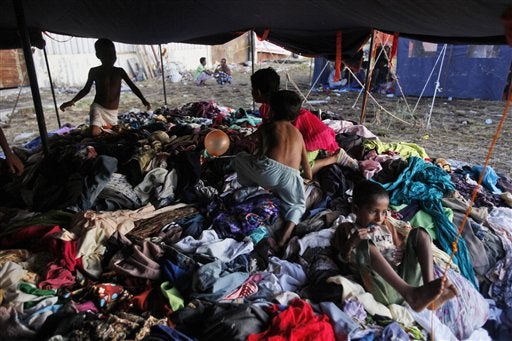 Ethnic Rohingya children play on a pile of clothes donated by local residents at a temporary shelter in Langsa, Aceh province, Indonesia, May 18, 2015. Boatloads of more than 2,000 migrants – ethnic Rohingya Muslims fleeing persecution in Myanmar and Bangladeshis trying to escape poverty – have landed in Indonesia, Malaysia and Thailand in recent weeks. (Photo by BINSAR BAKKARA / AP)

TANAUAN, Leyte — President Rodrigo Duterte is serious on his offer for the Rohingya refugees to come to the Philippines, and seek refuge from persecution by their leaders in Myanmar.

Secretary Harry Roque, presidential spokesperson, told reporters here on Sunday that the President was only upholding a tradition of the Philippines in accepting refugees from other countries.

“The President is serious in what he says,” Roque said. “The Philippines has had always an open door policy for refugees.”

[If you remember, there were the Vietnamese refugees. We have become a processing zone. Almost all of those who have been given refugee status passed through the Philippines.]

“So it is in that kind of tradition that the President stated that we’re willing to open our doors to the Rohingya refugees,” Roque added.

Earlier, the President said he would be willing to open the country to Rohingya refugees fleeing Rakhine State due to the persecution inflicted by the military-backed Myanmar government as part of their ethnic cleansing of Muslim refugees.

According to Human Rights Watch, more half a million Rohingya Muslims have fled Myanmar, and taken refuge in neighboring country of Bangladesh.

Roque said the Philippine Refugees Processing Center (PRPC) in Morong, Bataan could be the place where the Rohingya could take shelter.

[That’s not a problem because we have a processing center in Bataan. If there are refugees coming in huge numbers, we have the infrastructure, the place where they can be taken.]

The PRPC once served as refugee center for Indochinese refugees like Vietnamese and Cambodians back in early 1980s on their way to other foreign countries where they permanently settled. /atm