A group of protesters convened in front of the United Kingdom’s London School of Economics (LSE) on Friday where Vice President Leni Robredo was scheduled to deliver a message about poverty and role of politics in economic growth.

Before the event started, several indignant Filipinos based in UK gathered in front of the main LSE building carrying placards and posters denouncing Robredo’s presence in the school.

The protesters were shouting “fake VP,” while some of them even called on her to step down.

“No to Leni, fake VP… Resign!” the rallyists continuously chanted as they displayed messages “No to cheating, no to fake VP.”

On social media, netizens were even furious about LSE inviting Robredo. One account even commented: “So pathetic that you had to invite her.” 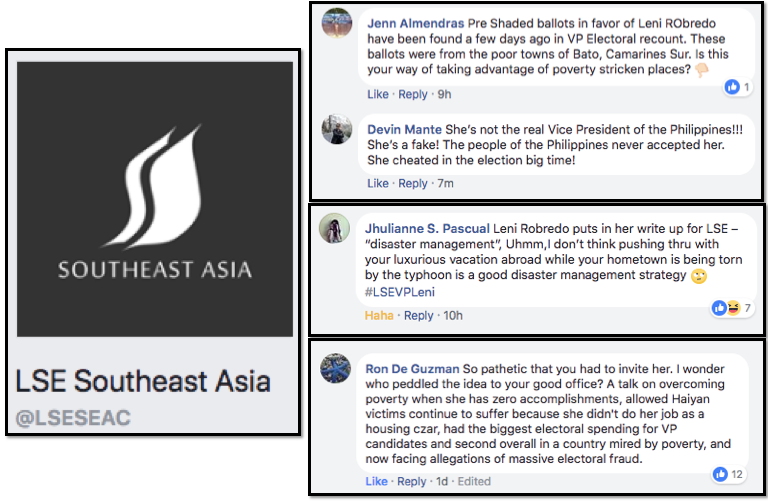 “Poor LSE, their school will just be used for Leni’s political agenda.”

Another netizen commented about the ongoing election protest: “I guess Leni will be teaching LSE how to wet ballots.”

The LSE is a prestigious educational institution in UK that has produced more than 30 world leaders and 14 Nobel Peace Prize winners.

After her speaking engagement, Robredo reportedly took the back door of the LSE in going out of the building to avoid facing the protesters.

This prompted the protesters to shout: “Takot si Leni, lumabas sa back door.”

In a statement issued by the Office of the Vice President (OVP), Robredo was scheduled to speak in a series of events in London including LSE and Political Science.

The OVP added that Robredo will also meet with members of the German government and civil society organizations during a study visit program in Berlin, Germany this coming week. /jpv

RELATED STORY: Robredo off to Europe for fora on social justice, poverty alleviation

Video source: From the Facebook page of Uk-Dds Activities and Events