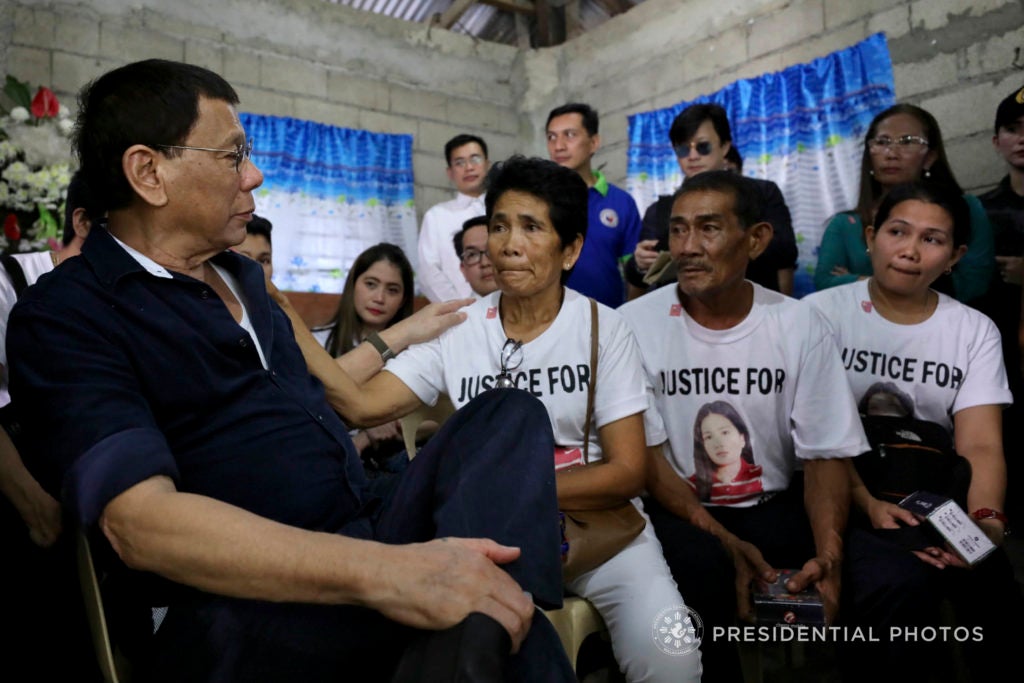 COMMISERATING WITH JOANNA’S KIN President Duterte commiserates with the parents of the Filipino domestic worker who was allegedly killed by her employers in Kuwait during her wake at Barangay Anoring in Sara, Iloilo. —MALACAÑANG PHOTO

Malacañang and lawmakers on Monday welcomed Kuwait’s swift action on the case of Filipino maid Joanna Demafelis, whose murder by her Arab employers in the Gulf state last year triggered a diplomatic crisis between the two countries.

But the Palace said Kuwait’s meting out the death penalty to the employers of Demafelis would not immediately result in the lifting of a ban on the deployment of Filipino workers to the oil-rich emirate.

Senior Deputy Executive Secretary Menardo Guevarra said the lifting of the prohibition would depend on the agreement being worked out by Filipino and Kuwaiti officials for the protection of Filipino workers in Kuwait.

“I think it’s still the agreement between the two countries on the manner of treating [Filipino workers] that will matter, not the matter of the couple being brought to justice,” Guevarra told reporters.

President Rodrigo Duterte has said the ban stays until the Kuwaiti government can assure the protection of Filipino workers in the emirate.

He has also set conditions for the lifting of the prohibition, including not confiscating Filipino workers’ passports, feeding them properly and giving them enough time to rest, stopping the practice of selling them to other employers, and allowing them to use cell phones so that they can keep in touch with their families in the Philippines.

A Kuwait court on Sunday found the Lebanese employer of Demafelis, Nader Essam Assaf, and his Syrian wife, Mouna Hassoun, guilty of murder in her death.

Labor Secretary Silvestre Bello III on Monday said Kuwaiti Ambassador to the Philippines Musaed Saleh Althawaikh had confirmed to him the court’s decision.

Bello said, however, that he was not ready to recommend to President Duterte the lifting of the ban on labor traffic to Kuwait.

If ever, he said, a partial lifting may be considered for skilled workers but only after the signing of an agreement for the protection of Filipino workers in Kuwait.

The body of the 29-year-old Demafelis was found in a freezer at an abandoned apartment in Kuwait City on Feb. 4, a year after she had been reported missing.

It was unclear when her employers fled Kuwait but they were arrested on Feb. 24 after an Interpol manhunt.

Lebanese media reported last month that Assaf was in custody in connection with the case and that authorities were considering a Kuwaiti request to extradite him.

Hassoun was reported to be in custody in Syria.

The Kuwait court tried the couple in absentia and reached a decision in the first hearing, sentencing them to death by hanging.

Foreign Secretary Alan Peter Cayetano on Monday thanked the Kuwaiti authorities for their “swift action” and called on the Lebanese and Syrian authorities to cooperate with the Philippines in bringing the couple to justice.

“This is a very important development in our quest for justice for [Demafelis]. We continue to look forward to the cooperation of our friends not only in Kuwait but also in Lebanon and Syria in our efforts to bring this case to a close,” Cayetano said in a statement.

Philippine Ambassador to Kuwait Renato Villa said Kuwaiti authorities had requested the extradition of Assaf but it was possible the Lebanese authorities may decide not to turn Assaf over and try the case in Beirut instead.

Foreign Undersecretary for Migrant Workers Affairs Sarah Arriola, who is in Kuwait to oversee the mass repatriation of overstaying Filipino workers, said the Department of Foreign Affairs (DFA) would provide lawyers should the Lebanese authorities decide to try the case in Beirut.

Arriola said officials of the Philippine Embassy in Beirut would meet with Lebanese authorities on Tuesday to see how Lebanon wanted to proceed with the case.

Kuwaiti authorities reportedly informed Arriola of the court’s decision on Sunday but did not provide details.

The Philippine Embassy in Kuwait City still has to receive a formal notification from the authorities, although it has obtained a copy of the court’s decision.

The Blas F. Ople Policy Center, a private group that helps Filipino migrant workers, urged the DFA to consult with the governments of Lebanon and Syria on how the employers of Demafelis could be made to answer for their crime.

“Extradition can be a complex judicial process and sometimes politics also may come into play, especially when the case involves the death sentence. The DFA through our embassies can engage the governments of Lebanon and Syria through diplomatic channels in talks about [Demafelis’] case [on] behalf of her grieving family,” said Susan Ople, head of the policy center.

Joyce Demafelis, sister of the slain maid, said on Monday that she wanted her family to be in Kuwait to see the execution of Assaf and Hassoun.

“I want to be sure that they are the ones who would be punished and that the sentence is carried out,” Joyce Demafelis said.

Members of the Senate on Monday thanked Kuwait for its fast action in the case of Joanna Demafelis.

They also urged the signing of an agreement between the Philippines and Kuwait for the protection of Filipino workers in the Gulf state.

“We’re thankful that justice has been served for [Demafelis]. Our task now is to ensure that such incidents never happen again,” Senate President Aquilino Pimentel III said in a statement.

Sen. Grace Poe said Demafelis deserved “swift and sure justice,” but added that all those responsible for her death should be punished.

Sen. Panfilo Lacson praised the Kuwaiti government “for the swift trial as well as the decision the court has rendered.”

He said the sentence must be carried out. “Then and only then can we claim justice is served,” he said.

Sen. Joel Villanueva said he hoped “this would not just be a paper victory” for the Philippines.

“The husband and wife [are] not under Kuwaiti custody. They should be made to face the consequence of what they have done in Kuwait before we can even think of any talk with the family of Demafelis for forgiveness,” he said. —Reports from Leila B. Salaverria, Dona Z. Pazzibugan, Tina G. Santos, Christine O. Avendaño, Nestor P. Burgos Jr. and AFP

Read Next
CCTV footage contradicts police claim vs suspected ISIS recruiter
EDITORS' PICK
DILG to stranded workers: ‘Stay where you are’ until Luzon-wide quarantine is over
BREAKING: 1,075 people in PH has coronavirus disease – DOH
Style and music journeys with Claudia Barretto
UP-PGH wards for COVID-19 patients finished in 5 days
IATF: Food firms to operate with 50% of workforce during Luzon quarantine
Cebu City closes its borders
MOST READ
Tootsy Angara bares neighbor wanted them out of village
Pacquiao to seek probe on leaked private letter from Barangay Dasmariñas
BREAKING: 1,075 people in PH have coronavirus disease – DOH
593 health volunteers sign up to fight COVID-19, says DOH
Don't miss out on the latest news and information.