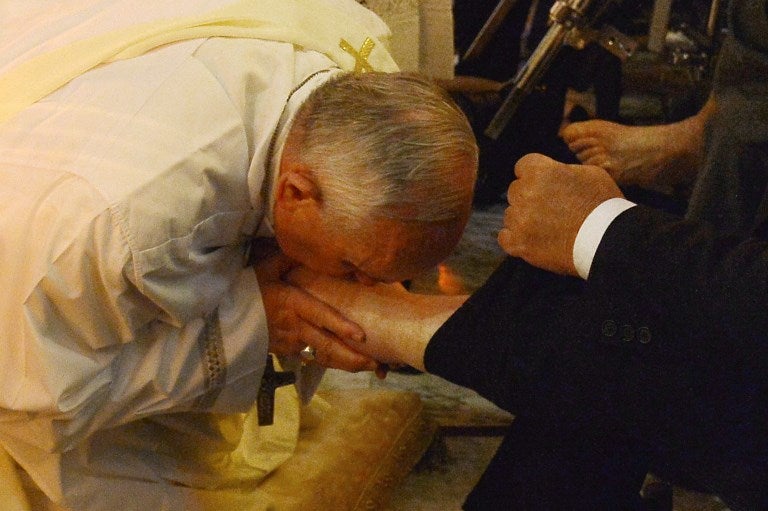 Pope Francis (left) kisses the foot of a person as he performs the traditional Washing of the Feet as part of Holy Thursday (Maundy Thursday) rite on April 17, 2014, in Rome. AFP FILE

ROME, Italy — Pope Francis washed prisoners’ feet at a Rome jail on Thursday, including a Filipino, two Muslims, an Orthodox Christian and a Buddhist, once again choosing to celebrate Holy Thursday among Italy’s incarcerated.

“Everyone always has the opportunity to change life and one cannot judge,” said Francis to the prisoners of the city’s all-male Regina Coeli prison.

It is the fourth time in the pope’s five year papacy that he has celebrated the Holy Mass in an Italian jail.

“For me, visiting the sick, going into prison, making the prisoner feel that he can have hope of rehabilitation, that is the preaching of the Church,” said Francis in a recent book of interviews.

This year, the twelve inmates washed by Francis hailed from Italy, the Philippines, Morocco, Colombia, Moldova, Sierra Leone and Nigeria.

The report did not identify the prisoners and it was not immediately known why the Filipino was in jail.

In Christian tradition, Jesus is said to have washed their feet ahead of the meal in a gesture of humility.

“I am a sinner like you but today I represent Jesus… God never abandons us, never tires of forgiving us,” Francis said to the inmates.

The ceremony is part of the run-up to Easter Sunday.

Since his election in 2013, the pope has moved the feet washing ceremony outside the walls of the Vatican and into centers for vulnerable people or those on society’s margins.

In his first year he visited a youth detention center where he performed the ritual on a group of young inmates including two Muslims — the first Catholic leader ever to do so.

Last year the pope went to Paliano jail outside Rome where he washed the feet of former mafiosi in a prison known for housing inmates who have informed on old mobster allies. /cbb