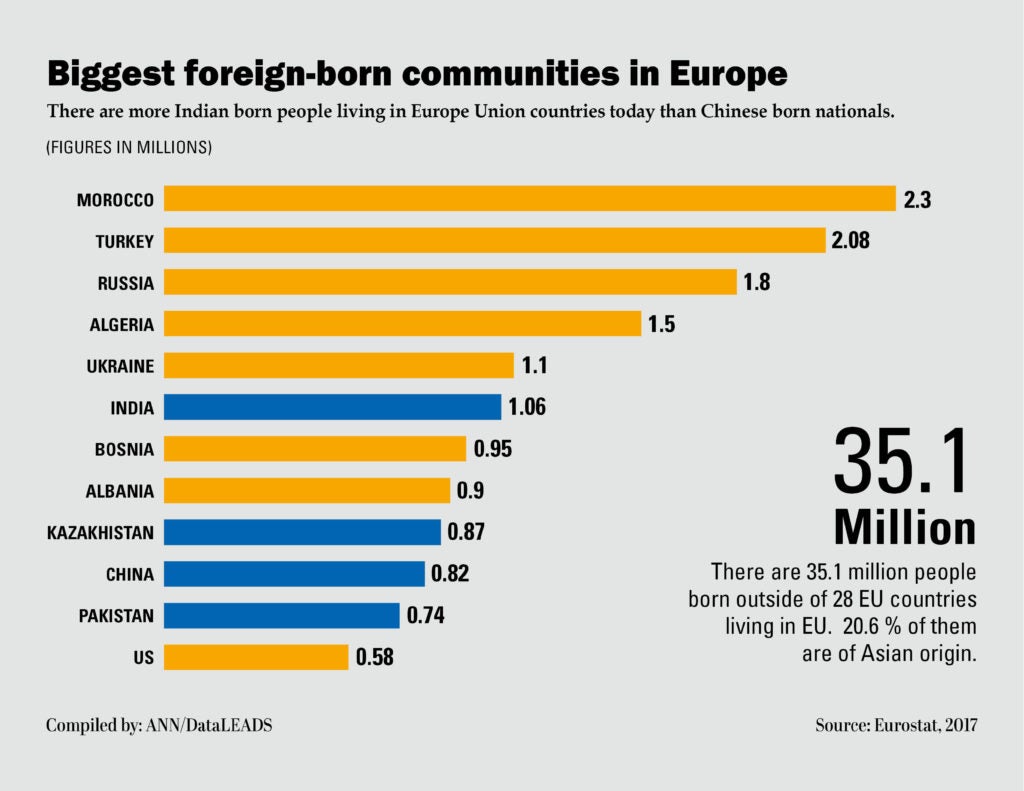 In total, there are 35.1 million people born outside of 28 EU countries living in EU.  Almost, 20.6 % of them are of Asian origin. The largest number of foreign born residents are living in Germany (8.7 million), as per the latest data from Eurostat, the European Union’s statistics office.

People from Morocco and Turkish origin are the largest among the foreign born population in Europe. While Turkish born people number 2.08 million, Moroccan origin people form the largest pool of foreign born Europeans at 2.3 million.

Russians, Algerians and Ukrainians also have a substantial presence in the European Union countries. As per Eurostat, there are 1.8 million Russians currently living in the EU. People from Algeria and Ukraine number 1.5 and 1.1 million respectively. People from Bosnia, Albania and Kazakhstan, while being shy of one million in number, stood at 0.95million, 0.9 million and 0.87 million respectively.

India has a long and historical relationship with different EU countries and over 1 million people from India have made the European Union their home.  Chinese and Pakistan born people living in the EU states outnumber those born in America. There are 0.82 million Chinese-born , 0.74 million Pakistani-born and 0.58 million American-born  living in the EU region.

The Europe remains top destination for immigrants due to its economic opportunities, pluralistic approach and equality with the goal of ensuring an open, tolerant and equal society for all.  The Europe also provides added advantage of free movement across member countries.

Read Next
China aircraft carrier leads ‘show of force’ exercise in South China Sea
EDITORS' PICK
IATF to LGUs: Issue ordinances vs attacks on frontliners, COVID-19 patients
Nograles: Cabinet members to donate 75% of monthly salary to aid COVID-19 fight
Diokno to Duterte: OK to make fun of buck tooth, but focus on people’s needs first
10 Filipinos positive for COVID-19 in UK, 7 in Ireland — envoy
Quick chat with Nicole Andersson: ‘You really don’t need much to be happy’
Robredo spox thanks Duterte for defending VP’s efforts vs COVID-19
MOST READ
Gov’t mulling quarantine period extension of 15-20 more days
Sotto on Isko Moreno’s call: We do our job without the media following our every move
Cook more and eat less: Tips on your quarantine diet
ADB warns PH against prolonged lockdown
Don't miss out on the latest news and information.