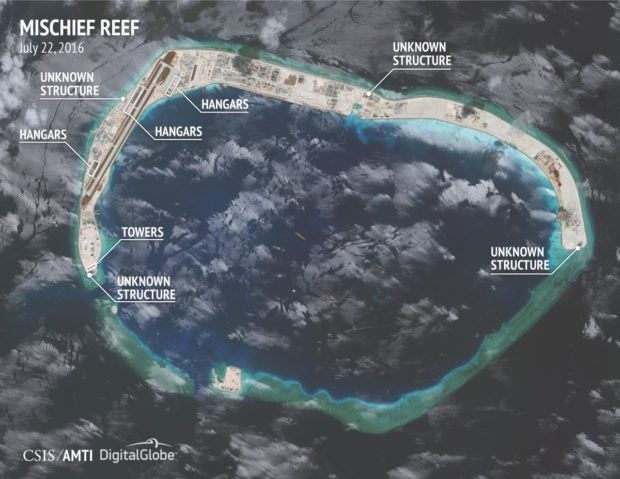 Mischief Reef. (Photo from the Center for Strategic and International Studies)

The US Navy carried out a freedom of navigation operation in one of China’s artificial islands in the South China Sea on Friday, news agency Reuters reported, citing US officials.

The USS Mustin sailed 12 nautical miles off Mischief Reef (Panganiban Reef) in the Spratly Islands, a group of islands also being claimed by the Philippines.

The warship also “carried out maneuvering operations” there, the report said.

The US military said it was part of their “routine and regular freedom of navigation operations” that they have done in the past and “will continue to do in the future.”

An international tribunal in The Hague ruled in 2016 that Mischief Reef belongs to the Philippines.

China has reclaimed land and massively constructed artificial islands on several reefs in the South China Sea to bolster its claims. The islands are capable of supporting military facilities, which has become a concern for several nations.

Also on Friday, China announced that it will carry out combat drills in the South China Sea as part of its annual exercises, China’s Defense Ministry said.

Quoting the PLA Navy’s [People Liberation Army] staff department, the ministry said in its website that the exercises is a “routine arrangement within the PLA Navy’s annual plan and it aims to test and improve the troops’ training level and comprehensively enhance the capability to win.”

It said that the drills are not aimed at any specific country or target.

A military expert told Chinese publication Global Times that Liaoning, China’s first aircraft carrier, may participate in the drills for the first time.

Details of the drills or its specific location in the South China Sea were not discussed, but the report said it will be held “in China’s territorial waters.” /jpv