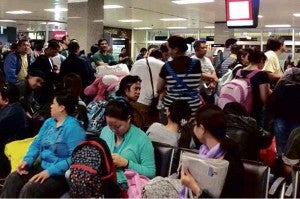 The Senate has adopted a resolution pushing for a total deployment ban to countries not granting Filipino household service workers rights and work conditions similar to their nationals.

Adopted last Wednesday night was Senate resolution No. 676 “expressing the sense of the Senate that the deployment of overseas Filipino household service workers to countries that do not afford migrants the same rights and work conditions as their nationals and allow the withholding of Philippine passports be totally banned.”

On the last session day last Wednesday, Senate President Aquilino Pimentel III sponsored the resolution on the floor where he sought an end to the bad experiences of many Filipino household service works in the hands of their foreign employers after he cited some of their cases.

He said the government could not stop Filipinos from going abroad to seek better jobs until it could provide them better lives at home.

“However, we can — and we should — limit the places where they seek employment in only countries that provide Filipino workers the same rights and protections given to nationals of that country,” Pimentel said.

He said he was co-sponsoring the resolution with Senators Emmanuel Pacquiao and Antonio Trillanes IV.

Pimentel expressed hope that the executive branch heed their call for a total deployment ban for Filipino household service workers in countries not according them the same rights and work conditions as their nationals.

Read Next
‘Sydney Declaration’ sends strong message vs aggressions in S. China Sea
EDITORS' PICK
Leveling up your ‘lutong bahay’ with the kitchen companion you never knew you needed
‘Puno na lahat:’ Metro workers brave lack of public transport, rains on Day 1 of GCQ
Duterte certifies as urgent anti-terror bill
Philippines’ COVID-19 cases accelerate to 18,638
Someone from the Philippines can become $356 Million richer this Tuesday
Cherry Mobile teams up with Cloud Panda PH, launches online store
MOST READ
‘If I had not been SolGen, I will make you eat your words,’ Calida tells Coco Martin
Duterte certifies as urgent anti-terror bill
5 car dealership outlets shutting down
Senate OKs bill authorizing president to postpone opening of classes beyond August
Don't miss out on the latest news and information.