Duterte to US: Keep PH out of your wars, expeditions | Global News

Duterte to US: Keep PH out of your wars, expeditions 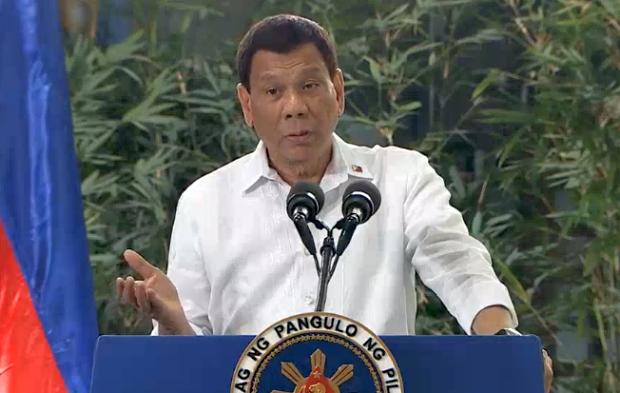 President Rodrigo Duterte on Wednesday said the Philippines would no longer join the United States in its wars and expeditions, saying his country always got nothing but “brutality and agony.”

“I’m addressing America right now; Wwhatever expeditions that you will conduct, any wars that you will fight in any other countries, count us out,” Duterte said during his speech at the graduation of the Philippine National Police Academy (PNPA) “Maragtas” Class of 2018 in Silang, Cavite.

The President said the Philippines would “stand on our own,” saying the country had enough of colonial rule.

“Wala kaming nakuha all these years of sacrifice except brutality and agony. We will stand on our own,” he said.

“We have been enslaved by two countries in succession – Spaniards for 400 years and the Americans for 50 years. Tama na po ‘yon. You have had your fill. Do not ask for more,” he added.

The Philippines has been a longtime ally of the US, with the two countries signing the 1951 Mutual Defense Treaty, covers mutual support in case of an external attack on either country.

Duterte said the US had always demanded their allies to participate in their expeditions.

“They always demand [their allies] that they participate in the expeditions,” he said, citing the wars in Iraq during the term of former US Presidents George Bush Sr. and George W. Bush.

Duterte said the Philippines would “never beg for any help.”

“Sometimes it could mean really the dignity of the people,” he said.

He maintained that the Philippines would no longer be join joint expeditions “unless we are threatened directly.”

“Unless we are threatened directly, there will be no more joint expeditions,” he said. “At least sa panahon ko. Maghintay kayong lahat kung mawala ako.”

He also slammed the US for allegedly stealing the natural resources of the Philippines and Middle Eastern countries.

“You stole our natural resources. Yyou stole the oil of the Arab countries, divided it arbitrarily into a nation at ngayon kumukuha pa rin kayo, hinihigop pa rin ‘yung oil and there is trouble everywhere,” he said. /atm