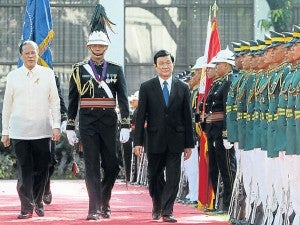 The navies and coast guards of the Philippines and Vietnam have forged cooperation agreements despite the continuing disputes among the countries claiming the resource-rich Spratly Islands.

President Benigno Aquino III and visiting Vietnamese President Truong Tan Sang also agreed on Wednesday that adherence to the UN Convention on the Law of the Sea (Unclos) was important in the peaceful resolution of territorial issues in the West Philippine Sea (South China Sea).

The two leaders witnessed the signing in Malacañang of the memoranda of understanding for information sharing between the two navies and for a hotline between the two coast guards.

“We also exchanged information and views on issues relating to the West Philippine Sea [which Vietnam calls East Sea] and reaffirmed the importance of the maintenance of peace, stability, maritime safety and security in the region,” Mr. Aquino said in a press statement issued after his bilateral meeting with Sang.

“We agreed that a rules-based approach, adhering to international law, especially the 1982 UN Convention on the Law of the Sea, is essential to the pursuit of a peaceful resolution of these issues through multilateral dialogue and consultations,” he said.

The two leaders also reiterated the importance of the full implementation of the Declaration on the Conduct of Parties in the South China Sea, which was signed in 2002 by Asean countries and China.

The countries with overlapping claims to the Spratlys are the Philippines, Vietnam, China, Malaysia and Taiwan.

The Philippines has protested China’s intrusions into Recto Bank.

Invoking the Unclos, the Philippines maintains that there should be no dispute over territories like Recto Bank, which is a mere 148 kilometers away from the province of Palawan and 1,017 km away from China.

The Unclos, which was enacted in 1982, states that a country’s exclusive economic zone extends 370 km from its continental shelf.

Sang, 62, arrived on Wednesday for a three-day state visit on board a chartered Vietnam Airlines flight that landed at Villamor Air Base in Pasay City at around 1 p.m.

He is the first foreign head of state to visit the country under Mr. Aquino’s administration.

Sang’s visit is in line with the 35th anniversary of the establishment of bilateral relations between the Philippines and Vietnam.

Explaining the new agreements with Vietnam, Mr. Aquino said: “Maritime cooperation between the two countries has evolved to become one of the principal pillars of our bilateral relations. Thus, I welcome the elevation of our consultations on maritime and ocean concerns to the vice ministerial level.

“Moreover, our agreements on oil spill preparedness and response, and on search and rescue at sea which was signed last year, as well as the agreements on the establishment of a hotline communications mechanism between our coast guards, and the agreement linking our two navies mark significant progress in ensuring a safer and more secure maritime area.”

The salient features of the agreement between the Philippine Navy and the Vietnam People’s Navy include the conduct of annual talks, cooperation in naval technology and equipment, exchange in personnel education and training, sharing of information, and interaction of personnel.

The agreement on the establishment of a hotline between the Philippine Coast Guard and the Vietnam Marine Police aims to establish a mechanism for the regular sharing of information, particularly incidents that occur at sea; protection of marine resources; prevention of smuggling, drug trafficking, illegal immigration and piracy; and the conduct of search-and-rescue operations at sea.

Another agreement signed was the Tourism Cooperation Plan for 2012-2015, which involves the conduct of joint tourism promotions, development of cultural tourism exchanges and exchanges in human resources and relevant tourism information.

In his own speech, the Vietnamese president said his country was also dedicated to a multilateral approach to territorial disputes in the region.

He said Vietnam would support and work closely with the Philippines and other Asean countries to promote the Philippine proposal for a zone of peace, freedom, friendship and the cooperation of parties in the West Philippine Sea/East Sea.

Sang said the two countries underlined the settlement of disputes through peaceful means on the basis of full respect for international law, particularly the 1982 Unclos.

He said the Philippines and Vietnam had agreed on the measures to further boost cooperation in areas such as politics, foreign affairs, defense and security, economics, trade, investment, maritime and ocean concerns, education and training.

“[At] the same time, [both] agree that the two sides need to expand our cooperation in other potential areas like tourism, energy, petroleum and mining,” he said.

Sang also indicated an agreement for increased trade between the two countries.