Duterte to nations: Pull out from ICC 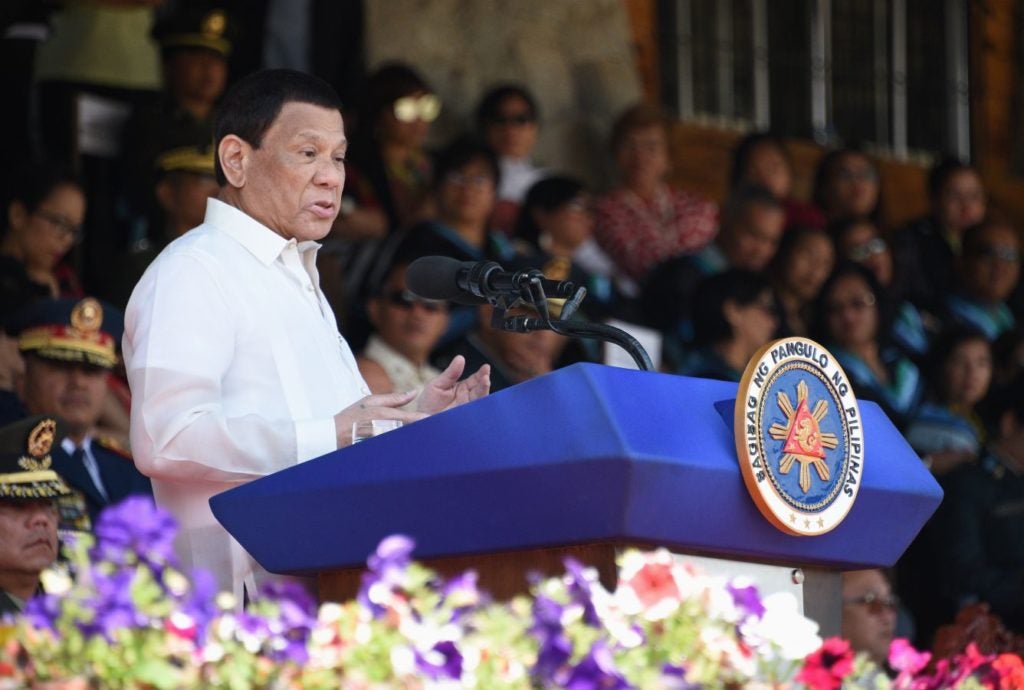 FORT DEL PILAR, Baguio City — President Rodrigo Duterte on Sunday urged governments to withdraw from the International Criminal Court (ICC), saying the tribunal — which is examining charges of crimes against humanity filed against him over the thousands of killings in his war on drugs — is “rude.”

Speaking at the graduation rites at the Philippine Military Academy, Mr. Duterte called the Rome Statute, the treaty that established the ICC, “bullshit.”

“The treaty, if you read it, it’s all bullshit,” he said.

Although the Senate ratified the Rome Statute, Mr. Duterte said the treaty was never enforced in the Philippines because it was not published in the government’s Official Gazette, as required by law.

“You know, if it’s not published, there is no law,” he said.

Due to that flaw, he said the ICC could never have jurisdiction over him, “not in a million years.”

Legal experts have argued that the treaty does not need publication to take effect in the Philippines, but Mr. Duterte maintained on Sunday that it should be published because it is “clearly a criminal law.”

Last month, ICC Prosecutor Fatou Bensouda announced that she had begun a preliminary examination of a complaint for crimes against humanity filed against him over the thousands of killings in his brutal war on drugs.

The move angered Mr. Duterte, who last week announced that he was withdrawing the Philippines’ ratification of the Rome Statute “effective immediately,” citing “a concerted effort” by Bensouda and UN human rights officials “to paint me as a ruthless and heartless violator of human rights.”

On Sunday, Mr. Duterte said he announced the withdrawal from the Rome Statute to draw the world’s attention to the issue he had with the ICC.

“I will convince everybody now who are under the treaty: get out, get out. It is rude,” he said.

Mr. Duterte also blamed the Rome Statute on the European Union, which was leading international calls for an independent investigation into the drug killings in the Philippines.

“It is not a document that was prepared by anybody. It’s an EU-sponsored [treaty],” he added, as he criticized the European Union for its “past sins” in its involvement in the Middle East and Africa.

“In the Middle East, they took so much of the oil, leaving the poor Arabs to fight each other. You go to Iraq on the pretext of [looking for] weapons of mass destruction, so they destroyed the country,” he said.

“And then the ICC prosecutes either black leaders or … they have so many problems but they find time to meddle with other countries,” he said.

Last week, the European Union told the UN Human Rights Council that it had included the Philippines on its list of countries with problematic human rights situation that required the council’s attention.

“The [European Union] remains deeply concerned about the high number of killings associated with the campaign against illegal drugs in the Philippines,” the bloc said in a statement.

“It is imperative to conduct prompt, effective, impartial and transparent investigations of all cases of death leading to prosecution in all cases of unlawful killing,” it said.

Human rights groups have criticized Mr. Duterte for his decision to withdraw the Philippines from the ICC treaty, saying the President is trying to evade accountability for his brutal war on drugs.

Critics say Mr. Duterte can’t withdraw the Philippines from the ICC by himself and may need the approval of the Senate, which ratified the Rome Statute in 2011.

Commission on Human Rights Chair Luis Gascon said that the Philippines had historically been at the forefront of the fight for international justice, but that Mr. Duterte’s decision “constitutes a reversal that will be viewed as encouraging impunity to continue.”

More than 120 countries have ratified the Rome Statute, which established the ICC in 2002 in The Hague.

More than 4,000 drug users and pushers in poor communities have been killed by police since Mr. Duterte launched his war on drugs in June 2016.

Thousands of others have been killed in vigilante-style attacks that rights groups blame on guns for hire working for the police or are police officers themselves.

The ICC can intervene only when a state is unable or unwilling to carry out an investigation and prosecute perpetrators of heinous crimes like crimes against humanity, genocide, aggression and war atrocities.

A Filipino, former University of the Philippines law dean Raul Pangalangan, sits as a judge on the ICC. —WITH REPORTS FROM DONA Z. PAZZIBUGAN, KIMBERLIE QUITASOL, KARLSTON LAPNITEN AND AP