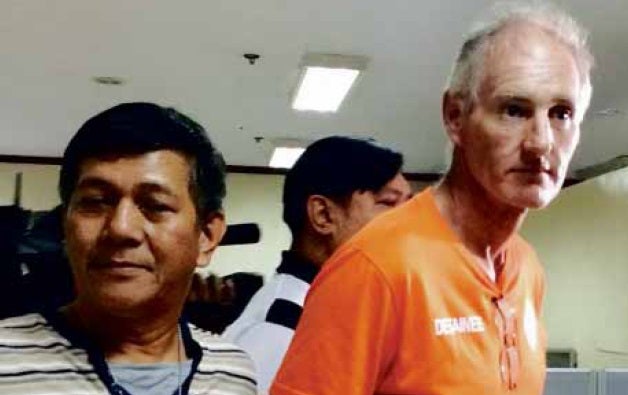 A government investigator leads away a cuffed Peter Gerard Scully (top photo) who was arrested for producing pornographic videos that showed toddlers and children being sexually
assaulted and tortured by his live-in partner, “Lovely.” CONTRIBUTED PHOTO

Australian taxpayers have been funding the legal aid of an accused pedophile facing trial in the Philippines for allegedly raping and murdering a 12-year old for his child pornography business.

Peter Gerard Scully, a 53-year old disgraced businessman in Melbourne, was detained in Cagayan de Oro City Jail after his arrest in 2015 for charges of kidnapping, human trafficking and rape.

Aside from rape charges, Scully was also accused of being involved in the production and dissemination of sadistic child pornography.

Scully was also the boyfriend of alleged child trafficker 23-year old Liezyl Margallo, who was arrested by National Bureau of Investigation (NBI) in January 2017 for allegedly conspiring with Scully to run a child pornography business.

Scully’s legal aid, according to a report by British tabloid The Daily Mail, was being funded by Australian taxpayers since 2015.

It was revealed in the Daily Mail report that Australian taxpayers have so far funded $500,000 of legal aid for Scully, who denied all allegations hurled against him.

According to the website, the Attorney-General’s Department may help Australians facing serious criminal charges in an overseas country with the cost of their defense.

Assistance would only be provided to accused Australians at risk of being punished by imprisonment for more than 20 years or the death penalty.

“The department may cover legal fees relating to the defense, and other related expenses. We will not, generally, cover the cost of any legal fees or expenses incurred before an application is made,” the website states.