US envoy ‘confident’ in ‘terrific’ ties with PH 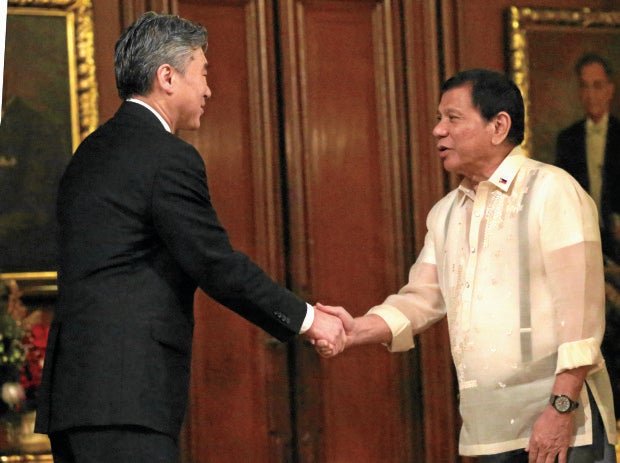 With over a year of stay in the Philippines, US Ambassador to Manila Sung Kim remained confident with the relationship between US and the Philippines, amid President Rodrigo Duterte being less dependent on the former colonizer.

“I’ve been here for a year and three months now. I have enjoyed it tremendously. It’s a very busy place and I have learned during the past year and three months that this is really a strong partnership,” Kim told reporters Tuesday on the sidelines of the formal turnover of ScanEagle drones to the Philippine Air Force.

Kim assumed his post as the representative of US to the Philippines in November 2016, at a time when Duterte was much more vocal of his dislike in the US. The President pushed for a supposed independent foreign policy, steering the country closer to Russia and China.

But Kim described the relationship of the US and the Philippines as “terrific” so far.

“So I feel very confident about the state of the relationship and I believe that going forward there are great opportunities for us to strengthen our relationship in a variety of ways,” he added.

The US turned over six ScanEagle unmanned aerial vehicles to the Philippine Air Force on Tuesday. The drones, which were acquired through foreign military grant, are worth $13.76 million.

“I think it represents the strength of our partnership. We really are committed to enhancing AFP’s capabilities and we know that ISR (intelligence, surveillance and reconnaissance) assets like the ScanEagle would significantly improve the AFP’s ability to detect terrorist activities, piracy activities, territory encroachment,” Kim said.