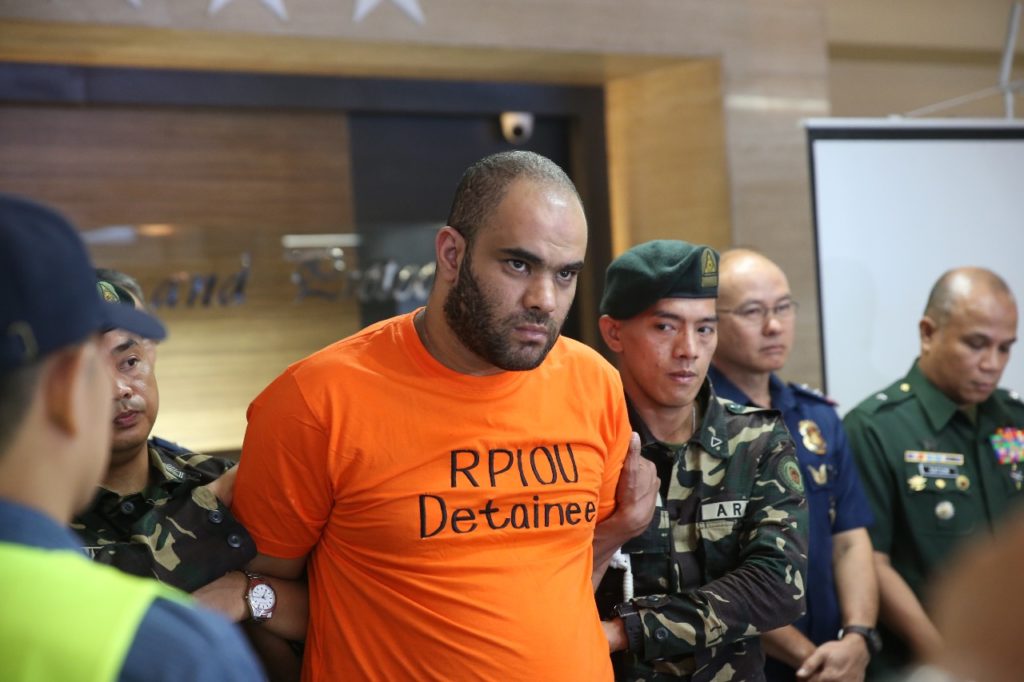 Tunisian national Fehmi Lassqued was presented by the police to the media on Monday. Photo by PNP-PIO

The Department of Justice (DOJ) on Wednesday dismissed the criminal complaint filed by the military and police against a suspected ISIS recruiter and his Filipina live-in partner.

Based on the compliant by the Regional Police Intelligence Operations Unit (RPIOU) of the Philippine National Police – National Capital Region Police Office, both Lassqued and Salipada were arrested at their apartment in Malate, Manila.

However, in his counter-affidavit, Lassqued said contrary to the police’s claim, he was not arrested in Ermita, Manila but at Ayala Triangle on Feb. 16 while he was taking his cigarette break from his Spanish class.

“Even if the subject gun, ammunitions and other items will be subjected to finger print examinations, my marks cannot be found there because I never touched it, held it or possessed it,” Lassqued said.

Salipada also denied owning the explosive devices and the firearm. She said when the police searched their apartment in Manila, she was taken and held outside the apartment.

On the photos of the seized explosive devises and firearms, the military and police said it was taken at the house of Lassqued and Salipada.

However, the DOJ resolution noted that the background of the picture of the seized items is different from the couple’s apartment.

“A perusal of the photographs suggest that these pictures were taken in a place other than the apartment of [Lassqued and Salipada] since their background are different,” the resolution noted.

“Finally, the fact that both respondent underwent medical examination at two different places on two different occasions suggests that they were arrested in separate places at different time,” the DOJ said.