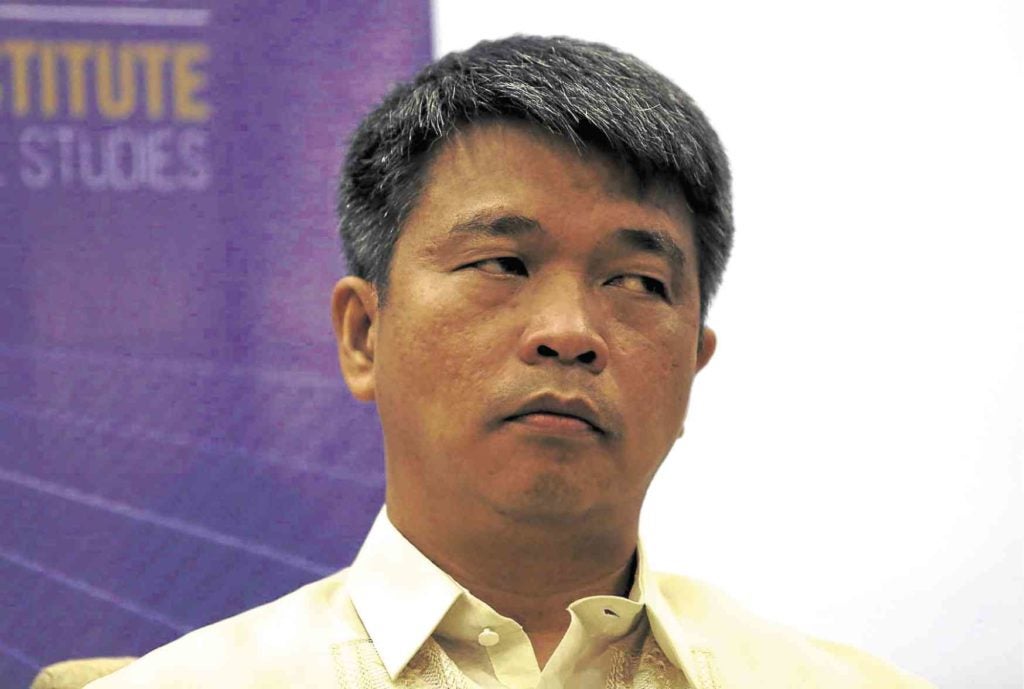 A maritime expert on Tuesday expressed alarm over a report in a state-controlled Chinese newspaper that the Philippine government would use natural resources as collateral for multimillion-dollar loans from China.

If true, the arrangement would have serious implications on Philippine territory, said lawyer Jay Batongbacal, director of the University of the Philippines Institute for Maritime Affairs and Law of the Sea.

“This is the first time I have heard of such arrangement. It’s like mortgaging our natural resources, and it is unconstitutional,” Batongbacal told the Inquirer by phone.

Malacañang, however, dismissed the report as “gossip.”

“Not true. That’s just [a] newspaper report in a country without freedom of the press,” said presidential spokesperson Harry Roque.

“We need to rely on basic [documents] and there isn’t any,” he said.

On Monday, the Global Times, a tabloid published under the auspices of the Chinese Communist Party newspaper People’s Daily, published a report on $7.34 billion in loans and grants given by China to the Philippines for 10 large-scale infrastructure projects, including two bridges in Metro Manila.

In the report, Zhuang Guotu, head of Xiamen University’s Southeast Asian Studies Center, discussed the cooperation between the two countries, saying that the Philippines could pay the loans because the interest rate set by China was “very low.”

“And the Philippines has strong debt-paying ability. Besides, the loans are usually accompanied by repayment agreements, which use certain natural resources as collateral,” Zhuang said.

Commenting on the report on Tuesday, Roque said there was no “mechanism” that would allow the Philippines to use its natural resources as collateral for loans.

“There’s only sovereign guarantee if it’s state to state,” he said, referring to government guarantee for the payment of loans.

Batongbacal said the arrangement was tantamount to alienation of the Philippines’ natural resources.

The 1987 Constitution states that “natural resources are inalienable.”

Batongbacal said Zhuang’s statement “raises a concern” and should be investigated.

The Global Times published the report days after President Duterte announced that he was open to China’s proposal for joint exploration in the West Philippine Sea, which he described as like “co-ownership.”

The West Philippine Sea refers to waters within the Philippines’ 370-kilometer exclusive economic zone (EEZ) in the South China Sea recognized under the United Nations Convention on the Law of the Sea (Unclos).

China claims nearly all of the 3.5-million-square-kilometer South China Sea, including swaths of the West Philippine Sea and waters close to the shores of other claimants to territory in the strategic waterway—Brunei, Malaysia, Vietnam and Taiwan.

In a ruling handed down on July 12, 2016, in a case brought by the Philippines challenging China’s sweeping claim to the South China Sea, the UN-backed Permanent Court of Arbitration in The Hague declared Beijing’s claim invalid under international law and recognized Manila’s exclusive right to fish and explore for resources in the West Philippine Sea.

The Duterte administration, however, has deferred asserting the ruling in favor of loans and investment from China.

The Hague tribunal ruled that Recto Bank was well within the Philippines’ EEZ. But China ignored the ruling, insisting it had historic rights to nearly all of the South China Sea.

On Tuesday, Roque disputed the contention of acting Chief Justice Antonio Carpio that China must first recognize the Philippines’ sovereignty over Recto Bank before the two countries could enter into a joint exploration deal.

“This joint exploration is by way of compromise, that we would not fight over the issue on who has sovereign rights there, let’s just benefit from it,” Roque said.

There is nothing wrong with a compromise because the Philippines has the exclusive right to exploit resources there, and can also agree to a joint exploration with foreigners, he said.

“That would be the decision of the sovereign state,” he added.

On Monday, Batongbacal wrote the first of a series of Facebook posts he planned, discussing joint development and its implications on the West Philippine Sea.

In his first post, Batongbacal emphasized that the Philippines conceding joint development at Recto Bank “could be a possible step backward from the arbitration,” referring to the Philippines victory over China in the Hague case.

“Even though the area has been awarded to the Philippines as [part of] its own EEZ/[continental shelf], entering into joint development with China could imply recognition that it has a valid claim (despite the fact that it was already determined by the tribunal to be illegitimate and thus unjustified),” Batongbacal said.

“By entering into a joint scheme (whether for exploration, development, or management), the [Philippines] suspends its sole, unilateral, and legitimate rights and prerogatives over the area and resources subject to joint declaration even though they have already been vindicated by the arbitration. To the extent that it does so, it may be setting aside the arbitral award,” he added.