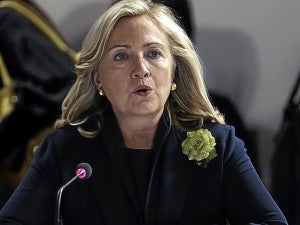 US Secretary of State Hillary Clinton will make a one-day visit to Manila on November 15 and is expected to meet with President Benigno Aquino, according to Foreign Affairs Secretary Albert del Rosario.

It will be the second visit of Clinton as US State Secretary under the Obama administration but her first one under the Aquino presidency.

Del Rosario said on Wednesday night that Clinton’s impending visit here came after he invited the former US First Lady for a visit when he was in the United States a few months ago.

“She will meet with the President,” Del Rosario told reporters after attending the visit of Vietnamese President Truong Tan Sang in Malacañang. Sang is in the country for a three-day state visit.

The foreign affairs secretary said Clinton would discuss both bilateral and multilateral issues, even the issue of human trafficking, in her meetings here.

Clinton will be coming from Hawaii where the US is this year’s host of the Asia-Pacific Economic Summit, according to Del Rosario.