PH lawyers’ group to test case at SC vs China 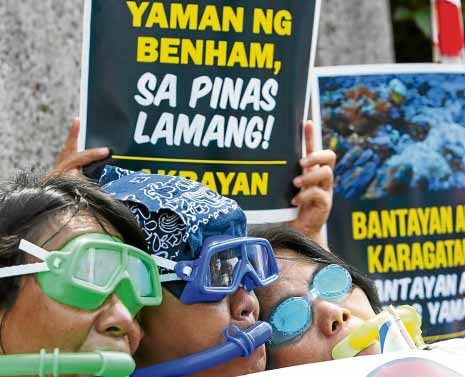 BAGUIO CITY — The Integrated Bar of the Philippines (IBP) is studying whether it could file a writ of kalikasan in the Supreme Court (SC) against firms contracted by China to build artificial islands in the West Philippine Sea, according to its president.

Lawyer Abdiel Dan Elijah Fajardo, who attended the IBP north Luzon legal aid meeting and international humanitarian law seminar here, said the China buildup would have required its contractors to dredge corals to build the platforms that support the islands.

“Our conclusion is that [the Chinese structures have led to] a maritime environmental disaster,” Fajardo said, adding that the IBP, a group where membership is mandated for lawyers, would seek damages and an injunction to stop the further destruction of the corals.

Should the Supreme Court grant the petition, it could also become the official government position regarding the artificial islands, he said.

The Duterte administration, through the Department of Foreign Affairs, appeared reluctant to oppose the buildup so “we try to compel a position from the judiciary,” Fajardo said.

“Our theory is that our local courts have jurisdiction even over foreign private corporations as long as the crime is committed in Philippine territory,” he said.

Fajardo said the United Nations Permanent Court of Arbitration ruled in favor of the Philippines when it resolved the case it brought against China’s “nine-dash-line” territorial map.

China, however, refused to recognize the ruling while the Duterte administration refused to use it to stop China’s buildup.

The IBP house of delegates, composed of presidents of 86 IBP chapters in the provinces, in January directed its national office to explore the possibility of suing China for environmental damages.

According to Fajardo, IBP had set up meetings with organizations working for environmental maritime protection as lawyers draft the writ petition. He said the lawyers were also gathering information about the corporations involved in building China’s artificial islands.

The Inquirer published aerial photographs that showed air and naval bases put up on artificial islands which China built on top of seven reefs within the Spratlys islands.

Among the structures were runways on the Kagitingan Reef, Panganiban or Mischief Reef and Zamora or Subi Reef.