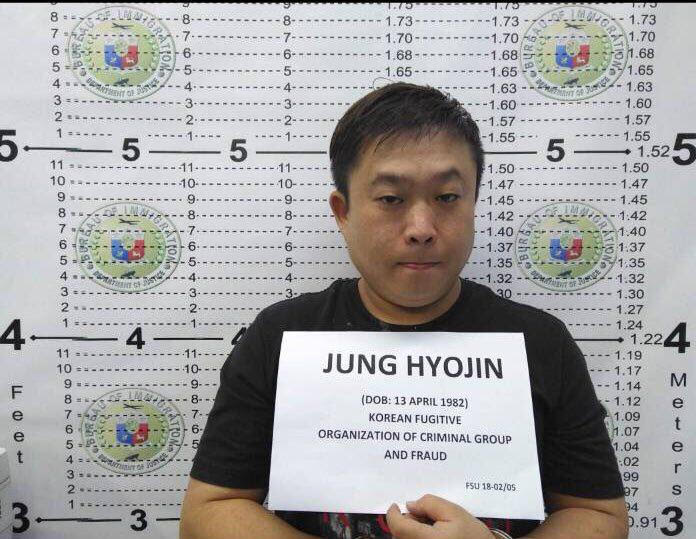 South Korean fugitive Jung Hyojin wanted for a multi-million dollar ‘telephone fraud scheme’ in his country is processed after his arrest by the Bureau of Immigration (BI).

A South Korean fugitive wanted for a multi-million dollar “telephone fraud scheme” in his country has been arrested, the Bureau of Immigration (BI) revealed on Monday.

The fugitive, identified as 35-year old Jung Hyojin, was a subject of an Interpol red notice after being issued three arrest warrants by the Seoul central district court, BI Commissioner Jaime Morente said in a statement.

The court, Morente said, indicted Jung for organizing a fraud syndicate, an offense that carries a maximum jail term of 10 years.

Jung was arrested by BI Fugitive Search Unit (FSU) agents in Malate, Manila on Thursday, February 22. Morente said the fugitive was detained at the immigration facility in Bicutan, Taguig.

Morente said that Jung was an “overstaying and undocumented alien” as his passport was already canceled by the Korean government.

“Like all the other wanted foreign criminals that we caught after hiding here to avoid prosecution, he (Jung), too, will be deported to face trial in his homeland and receive punishment for his crimes,” Morente said.

“His presence here poses a threat to public safety and security,” the Bi chief added.

Moreover, BI FSU chief Bobby Raquepo said Jung headed a criminal organization in Korea from 2013 to 2015 which defrauded victims of more than $8 million.

Jung’s group operated a telecom fraud call center which made phone calls to victims who were coerced to give their money after being harassed and intimidated by callers who pretended to be police investigators, Raquepo explained.

“Investigators alleged that the syndicate operated its business from February 2013 to February 2015 after which Jung and his cohorts disappeared and absconded with the victims’ money,” Raquepo said.

“A check of the BI database showed that Jung fled to Manila on Feb. 23, 2015, and did not leave the country since then,” he added. /cbb